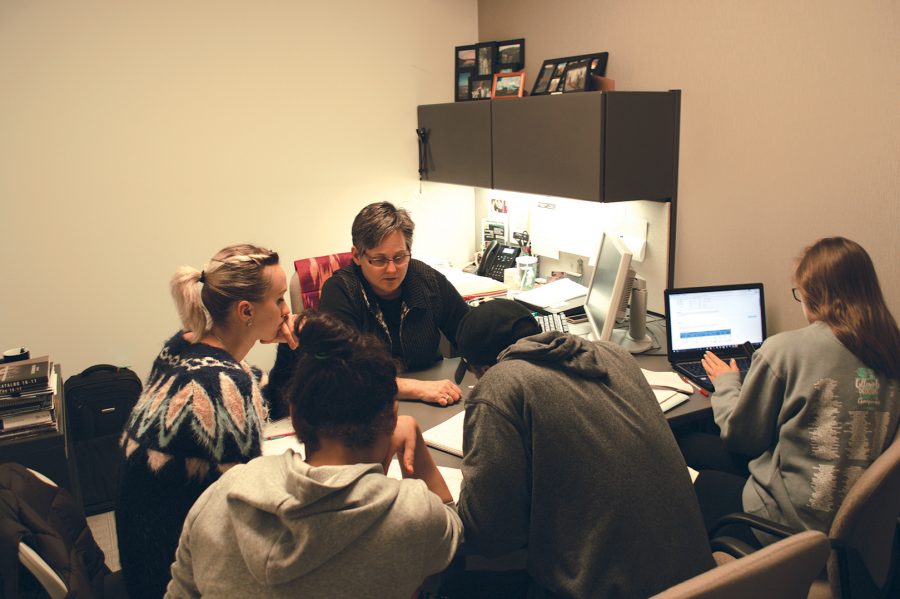 Chatter often leaks from associate business professor Elizabeth Ammann’s secluded office, tucked away in Harmon Hall. After class, students regularly congregate around her desk. Shifting focus from one student to the next, Ammann carefully reviews material with each.

Ammann is “hanging up her chalk” this May, after what will be 34 years of teaching business at Lindenwood University.

She said she was only one of about seven faculty in Lindenwood’s old business department when she first started in 1983.

“In class everyone is laughing with her, but at the same time [they] are learning,” international business major Fani Garcia said. “[Accounting] is a really cool class.”

Business professor Mira Ezvan has been working alongside Ammann since 1984.

“She’s always incorporating technology into class,” Ezvan said. “She’s diligent, she follows up emails with the speed of light and she spends a lot of time preparing classes.”

Ammann has kept up with changes at the university. For instance, the overhead projectors and chalkboards in her first classrooms have been replaced by computers and sleek whiteboards.

Ammann said one of her first meetings ever with the late Dennis Spellmann was to ask for computers, which are now available across campus.

Ellis has worked with Ammann for 19 years. He said she cares about the students and referred to her as “mother of the school of business,” a school that has grown tremendously since it started.

About 15 years ago, Ammann started coordinating study snacks for students in the lobby of Harmon during finals week during both fall and spring, Ellis said. Since she came up with the idea, faculty have been bringing in candy and cookies for everyone.

According to Ellis, Ammann also is in charge of the accounting finance club. She lines up speakers from the outside to come in so that students have a low-pressure chance to meet potential employers before they graduate.

Ammann also created the accounting major of the year award, as well as the plaque in Harmon that she always has kept up-to-date with students’ names.

Ammann lives about 45 minutes away in Alton, Illinois, with her husband and eldest of two daughters. Whenever she’s needed on campus, she’s quick to rearrange her plans to help at the university, Ellis said. He tells her she doesn’t need to come, but she always does.

“If you ask her for help,” Garcia said, “even if she has to repeat the whole class, she does. She’s not just saying the topic, but it actually seems like she loves what she does. That’s better for the students because it’s easier to learn that way.”

Alumni still come back asking Ellis and Ezvan how Ammann is doing.

“She has great dedication to her students. She wants to see everybody do their best and learn,” Ellis said.

At graduation in May, the senior faculty member walks ahead of their colleagues with the ceremonial Lindenwood mace. Ellis hopes to see Ammann carry the mace as she walks out with the staff one final time.