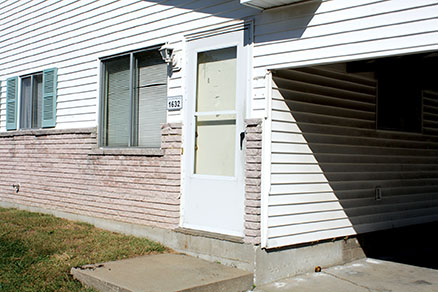 Photo by Walker Van Wey
The incident took place in men’s housing at 1632 Cullom Dr., which is five minutes away from campus.

Lindenwood University has launched an internal Title IX investigation into allegations that three members of the men’s basketball team were involved in a rape in men’s housing last month.

According to Lindenwood’s Title IX Coordinator Tina Babel, the significance of Title IX can be explained in just one sentence: “There will not be gender discrimination in education.”

Babel said she could not comment on specifics of this particular case, but she could comment generally about the investigative process that Lindenwood is using..

Babel said that Lindenwood’s investigators will attempt to determine the truth of the incident and will hand out any appropriate disciplinary measures — in this case that would be to juniors Tylan Birts, Ermias Nega and Bradley Newman.

On Oct. 14, Birts and Nega were charged with second-degree rape, and Newman was charged with misdemeanor invasion of privacy in the St. Charles County Court.

Babel said that the investigation takes a victim-centered approach and does not have the same guidelines as the criminal case.

Investigators will speak to anyone who could have knowledge of the incident.

The initial Title IX investigation will be completed within 60 days, according to Babel. At that time, an appeal may be filed.

Following the investigation, Dean of Students Shane Williamson will make the final decision on any disciplinary action.

Babel said one of the main reasons for the internal investigation is to have a quicker process than the criminal case, which often takes more than a year and a half.

“We try to make everyone comfortable, and we are just trying to get at the truth,” Babel said.

The sexual assault happened Sept. 18 in men’s housing in the 1600 block of Cullom Dr., according to court documents. The location is approximately five minutes from Lindenwood’s St. Charles campus.

According to police, Nega had consensual sex with the woman, 22, who is not a student, then left the darkened bedroom. He encouraged Birts, his roommate to go in and have sex with the woman, saying she was “ready” for him. When the woman realized what Birts was doing, she turned on the lights. Newman also was in the room, police said, crouched in a corner, naked, watching and waiting.

Nega allegedly then tried to discourage the woman from reporting the assault, and told her she would be “shamed” if she said anything.

Nega’s attorney, Bill Byrnes, said Friday that he “strongly believes” his client is innocent and said Nega will be pleading not guilty in the criminal investigation. Attorneys for the other players could not be reached for comment.

According to the Lindenwood athletic website, Birts is a journalism major, Nega is a criminal justice major, and Newman is a business management major.

The sexual assault resulted in a RAVE alert being sent to all Lindenwood students.

A spokeswoman in St. Charles Prosecutor Tim Lohmar’s Office said that although Nega had consensual sex with the woman, he was an accessory to the crime. Nega’s actions to set up the incident, make him just as liable as Birts, she said.

All three men are free after posting a portion of their bonds. Birts and Nega had their bond set at $20,000, while Newman’s bond was set at $5,000.