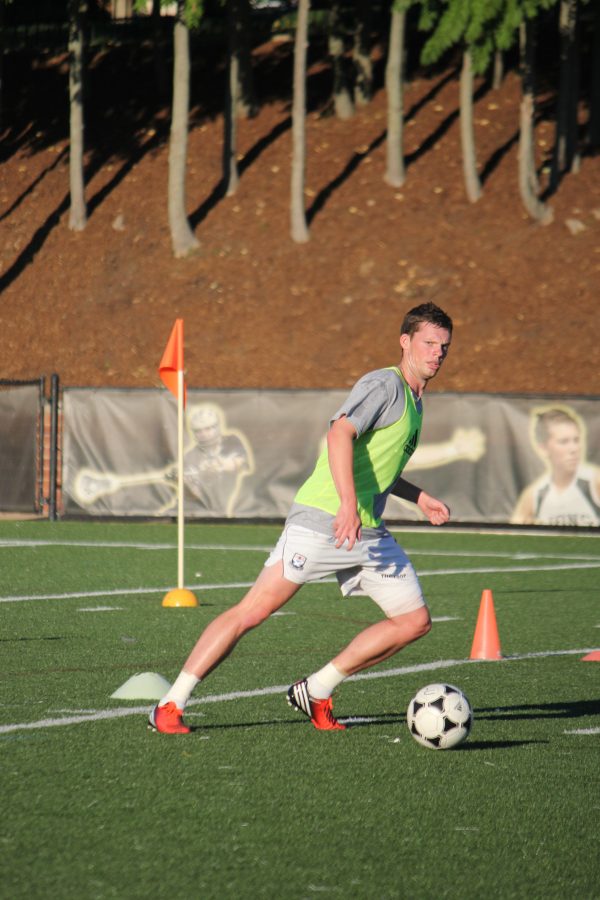 Photo by Brett McMillon Junior defenseman Craig McTear runs a drill with teammates during a practice last month. McTear was one of the Lions’ leading scorers in 2011.

If Lindenwood soccer defenseman Craig McTear hadn’t jumped, his life might have gone differently over the last eight years.

Friends gathered around an unconscious 13 year old McTear. He had passed out after ending a game of chase by botching his landing at the base of a hotel staircase. His left ankle gave out when its ligaments tore on impact.

What began as a club soccer banquet for the 13 year old turned into a visit from an ambulance.

Soccer, or football as it is called in his native Scotland, had been a constant part of McTear’s life since he was 5 years old. Doctors told him he could not play until his recovery was complete.

For 10 weeks during the summer, McTear stood on the sidelines at games and sat on the couch playing Play Station at home. His young soccer career was on hold.

“Sitting there watching my team play and not being able to help them, back in the day, it was bad,” McTear said.

By the end of the summer, McTear’s ankle eventually had healed enough so he could return to the field.

During the next five years, he played for multiple club and professional teams around southwestern Scotland.

While in high school, McTear and and his teammates at the Greenwood Academy in his hometown of Irvine, Scotland decided to take their preparation to the next level. With six games left in the playoffs, they began practicing extra after school in the cold Scottish winters.

“We put in a lot of work, to be fair, with the team,” McTear said. “Not many school teams take things serious. Like, we don’t have training. We don’t have stuff like that. We knew we had talent. We had a good set of players.”

They made it to the Scottish Schools Cup Final, which features the best teams in the country from each age range.

Two years after jumping the stairs, McTear again found himself standing on the sideline. His ankle twisted awkwardly during the semi-final. Nothing was torn, but he couldn’t play.

Greenwood won on penalty kicks. McTear stood on the sideline, of a professional soccer stadium, and watched as his team become the best second year high school team in Scotland.

After high school, McTear took a year off from classes to decide what he wanted to do with his life. McTear said the structure of a Scottish university would make it difficult for him to earn a degree and play soccer.

At 18 years old, McTear injured his ankle again while playing for Ayer United. Team management decided to send him down to Troon Football Club of the Ayshire District League to rehab his ankle.

One day after a Troon F.C. practice, McTear was approached by Gordon Inglis, a Scotsman and Lindenwood soccer alumni.

Inglis asked if McTear had ever considered playing in the United States, where he could attend school and play soccer at the same time.

“Obviously, me being 17 or 18 at the time and watching American Pie and all those films, I was like, ‘Yeah, I want to go over there,” McTear said.

His parents, Jon and Lesley McTear, encouraged him to pursue playing soccer in the States. They did not want him to look back on his life and regret giving up either the chance to play soccer, or earn a degree.

The family had multiple discussions about what was best for the future, and the opportunities the American educational system offered out weighed those in Scotland.

The decision was made that McTear would go play for Lindenwood.

While deciding whether he wanted to go to America, several professional teams offered part time contracts. Shortly before he was due to leave for St. Charles, one final European team expressed interest.

Bristol City Football Club was competing for a spot in the English Premier League, and they invited McTear to come to England for a tryout.

Winning a spot on Bristol City’s roster would have guaranteed an academy contract for the first season, and a full-time contract  if a  second year was added.

McTear decided not to attend the tryout, because his mind was set on playing in America.

“I possibly tried to steer him to actually go for the [tryout],” Jon McTear said. “It was a case of, you never know if you don’t try. But, it was also the fact that I worked as a scout for various pro teams over here. And I had seen so many kids try to follow that dream, to fall flat, with nothing to hang on, with no education, and the prospects were very low.”

During the fall of 2009, Bristol City fell a round short of getting into the English Premier League.

A few weeks after becoming a Lion, McTear took part in a preseason exhibition versus the Bosnian Club team at Hunter Stadium. After poking a ball loose on defense, he was checked by a Bosnian player. His hips were pushed vertically in opposite directions, injuring a ligament in his back.

The injury resulted in a medical redshirt.

“My body was a mess,” McTear said. “I went to the treatment room everyday, and I was fine after a year. Back to playing.”

McTear was used to tough play, because in Europe referees are less sensitive to physicality. In Scotland he said the goal was to eliminate the best player on the opposing team early in the game. Since arriving at LU, he has learned to target the ball instead of the ball handler.

One thing that hasn’t changed is the way he talks to opponents during games.

“I like to give the other team quite a bit of abuse to be fair,” McTear said. “Quite a lot of abuse actually.”

Head coach Carl Hutter sees more potential in McTear, and wants to see the defenseman put in more time conditioning on his own. He said there has been lots of development during McTear’s more than three years with the program.

“Good kid, good family, talented athlete,” Hutter said. “Now there is a challenge for him to work to raise his level, and he is doing that. And he has overcome some injuries and stuff. You know, I’m proud of him.”

He did not miss extended time last season, but his ankle was bothering him. A ligament started to tear midway through the season. With a 2-0 lead and two minutes remaining in the season’s final game McTear made a slide tackle shortly before being removed.

He felt fine, but the next morning when he woke up his ankle was swollen, and he was unable to run.

McTear went for an MRI on the ankle, which showed the ligament had ripped off the bone during his last slide tackle. The doctor told him if he had originally broken his ankle at 13, it would have healed more easily throughout his career.

McTear was given a choice: surgery and an 18-week recovery, or never play soccer again. He decided to remain in St. Charles during the summer, and had pins and clamps inserted in his ankle to reattach the ligament.

He spent four weeks unable to stand, six weeks on crutches, four weeks in a walking boot and four weeks without being allowed to run.

Healthy returned by the beginning of the season, and McTear started six of LU’s first seven games. He has three points during those games with a goal and an assist.

“He comes back and he comes back just as strong every year,” said teammate Tiago Baptista Pereira, a junior forward  “And that is always good for us. It is not good for him to always be injured, because we miss him. But when he is back, we almost always win our games when he is on the field.”

McTear said he sometimes reflects about how his life could have been different if he would have run down the stairs eight years ago. He might be playing somewhere else in the States or in Europe. Even with that knowledge, he said he is happy to be at LU, because he knows nothing is guaranteed.

“It quite easily could have happened in the next game,” McTear said. “It is part of the game, to be honest. You see professional players everyday break their legs and stuff, but you just need to put in the work to come back and be as good as you can.”