Ballot selfies: Think twice before clicking at the polls 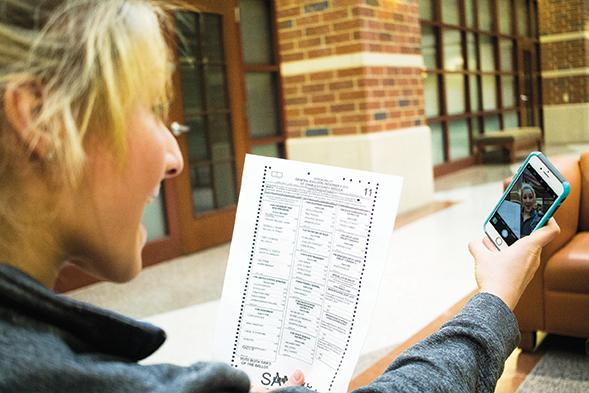 Many millennials will be voting for the first time next week, but they should think twice before posting information about how they voted on social media.

Laws regarding taking selfies with ballots vary from state to state, and their interpretation can sometimes vary from county to county.

In Missouri, laws prohibit “voters from allowing others to see their ballots if the intent is to show how they voted,” which is designed to discourage the buying or selling of votes. But Secretary of State spokeswoman Stephanie Fleming called ballot selfies a “gray area” and advised voters to check with local election authorities.

In St. Charles County, where many Lindenwood University students will be voting for the first time on Nov. 8, officials say it’s illegal.

“My judges, trainers taught by election judges, [know] that there are no selfies allowed, no cameras allowed in our building,” said Rich Chrismer, director of the local election authority.

If a voter is spotted using a camera at a polling place, an election judge will ask the voter to put the camera away, Chrismer said. However, whether the voter would be criminally charged for such action would be up to a prosecutor, he added.

St. Charles County Prosecutor Tim Lohmar said Friday that if there’s sufficient evidence of a crime, “we’d review it and decide if we will issue charges.”

This isn’t the first time Chrismer has been faced with a voter taking photos of a ballot. In 2009, a voter posted a photo of his write-in vote for then-Blues star T.J. Oshie for mayor of O’Fallon. Chrismer told the St. Louis Post-Dispatch at the time that “it was a ‘very serious’ breach of state code and that he would seek prosecution of the offender.” As a local election official, however, he didn’t have the power to do it.

He later decided not to pursue charges.

Singer Justin Timberlake recently became part of the discussion about ballot selfies after he flew to Tennessee to vote early and posted a photo of himself in the voting booth to his Instagram account, according to St. Louis Post-Dispatch.

[perfectpullquote align=”left” cite=”Missouri Revised Statutes” link=”” color=”” class=”” size=”21″]“On the part of any voter, except as otherwise provided by law, allowing his ballot to be seen by any person with the intent of letting it be known how he is about to vote or has voted, or knowingly making a false statement as to his inability to mark his ballot.”[/perfectpullquote]

The offense in Missouri carries up to a year in prison, a $2,500 fine or both, according to the Missouri Revised Statutes.

In 19 other states plus the District of Columbia, ballot selfies are allowed, according to an Oct. 23 article by the Associated Press. The law of Illinois is similar to Missouri’s.

Austin Byrd, an active member of Lindenwood’s College Democrats, said he understands the reasons for the law but still thinks ballot selfies should be allowed if it could help voters, especially millennials, go to the polls.

“I don’t think it’s any different than grabbing a sticker on the way out that says ‘I voted today,’ and being proud of it,” he said. “I think it’s kind of, whenever you vote you want to identify yourself with being a voter, and taking a selfie is another way of doing that.

“On the part of any voter, except as otherwise provided by law, allowing his ballot to be seen by any person with the intent of letting it be known how he is about to vote or has voted, or knowingly making a false statement as to his inability to mark his ballot.”