LU Macbeth is a humanized version of the old tragedy 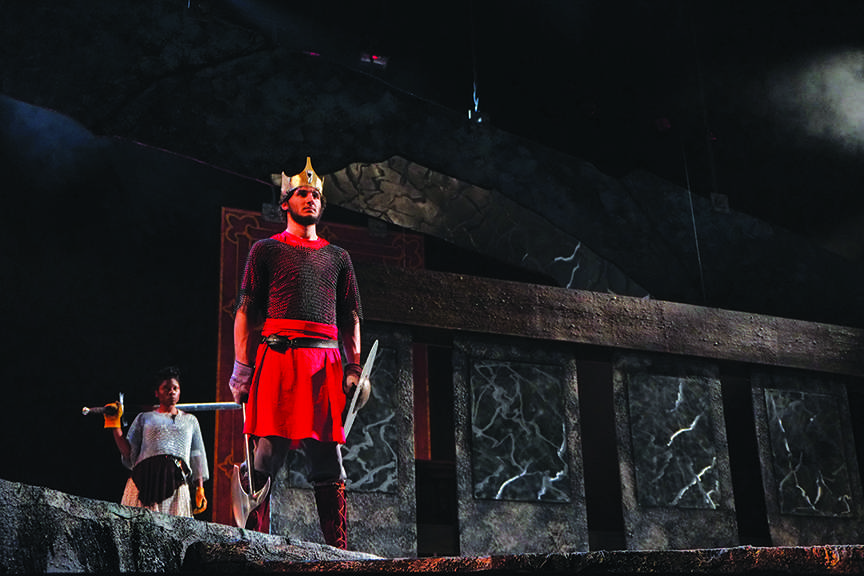 “Macbeth,” one of the greatest tragedies by William Shakespeare, hits the Lindenwood Theater Nov. 3, and this production promises to be a more humanized version, according to the director.

He said his priority has been to “let them be vulnerable and let them be simple, flawed people who go through these outrageous circumstancesbut are always grounded to each other and to themselves.”

“I’ve seen the show several times and usually one or both of them doesn’t do it for me for whatever reason and that’s because they’re trying too hard to play villains or they’re weighed down by the text,” he said.

Hunter Fredrick, who is starring as Macbeth, said, “When you view those characters Macbeth and Lady Macbeth as just evil or inherently bad, then that takes away their relatability.”

“Just like most of us, she has a dysfunctional home life, baggage, and a desire to live a happy and fulfilling life,” she said.

Flannery, who is directing “Macbeth” as his thesis project, has wanted to work on the play before but has not been given an opportunity until now. He previously has worked on two smaller plays, “Gruesome Playground Injuries” and “Eurydice.”

[perfectpullquote align=”left” cite=”” link=”” color=”#D1D866″ class=”” size=”30″]“It was definitely going to be a big enough show and have enough support from faculty and advisers,” he said.[/perfectpullquote]

“Macbeth” tells a story of a Scottish general, Macbeth, who desires to become the king, and his wife, Lady Macbeth, urges him to it. He commits a murder, which gets him the throne, but it also sets off a series of murders that puts him into a mental prison that will affect everything in his life.

“It is a very dark show emotionally,” Fredrick said.

Flannery said “Macbeth” is mostly a play about murder, but more specifically how such actions “poison” the characters and make them lose themselves.

Fredrick said playing Macbeth has entailed many challenges, including getting into a mind of a character “who hallucinates and envisions blood.”

Baker also said it has been challenging to find “a safe way to explore the torment” Lady Macbeth goes through. In addition, having one-third of the lines in the show and fighting with legitimate weapons onstage have been challenges for Fredrick.

“You have to have ice in your veins because you have to get it down to a science,” he said. “To where if you have too much emotion … if I do one move wrong, then he’s dead.”

Flannery said that seeing stage combat like this in a Lindenwood theater is rare, and with the design elements, they will make “Macbeth” “a unique production.”

“I think the whole design theme has really gone all out as far as they can,” he said.

Technical Director of Lindenwood Theater Stuart Hollis said the design of the rocky step-like set structure started from an idea of a castle ruin, which was combined with a little “aspect of edginess” taken from video games.

However, the design is mostly focused “on the senses and the environment,” how the show feels and that way being more based on the “emotional aspect” supporting the mental journey of Macbeth in the story.

Fredrick said that the Lindenwood production of “Macbeth” will be “Shakespeare elevated in the way that Shakespeare would want it to be.”

“You will never see anything like it,” he said. “It is absolutely phenomenal.”

Fredrick said even if a patron is not a theater or Shakespeare person, he or she “will be astounded in the first two minutes of the show.”
Flannery said that the storytelling of the show is an important aspect as well.

“If anything, I would love the audience to walk away feeling invigorated that their imaginations have been captured by this, and at least take away an appreciation for his storytelling,” he said.

“Macbeth” will run on Nov. 3-5 at 7:30 p.m. in the Lindenwood Theater at J. Scheidegger Center. Tickets are available at the box office.