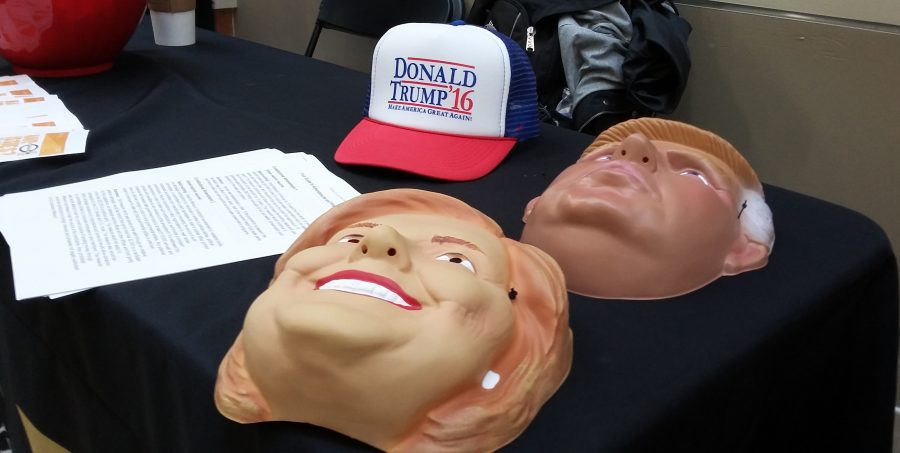 Photo by Tyler Tousley Masks of Donald Trump and Hillary Clinton were available for students to try on and take pictures in.

Heppermann is hoping for a turnout of at least 100 students, if not more.

“I know it’s hard getting people to shuffle through and stop; we’re busy throughout the day, but I think 100 is a good number.” She realizes that 100 students may not be reflective of the entire university, but that it would give a solid taste of how students feel.

The mock election was set up with several tables in the Atrium including one with information on the amendments, candy and masks of the two major candidates. Next to the table were cutouts of both Hillary Clinton and Donald Trump for students to get their picture taken with the candidate.

Across from the main setup was a table with the ballot box, ballots and two private voting “booths” separated by folders. Student Posy Durr cast her vote and felt like it prepared her for the real thing.

“It’s just a really cool experience. You can kind of get yourself some experience with the amendments of Missouri and what they actually mean before actually voting. The ballots are set up really nicely, a lot like the real ballot,” said Durr.

She thinks this will help calm the nerves of first time voters. Overall she felt that this mock election was “a really fun idea to get people to come out and vote.”

The election was open to all Lindenwood students, regardless of if they are registered to vote in Missouri. This includes international students and students from other states.

“Since we have such a large population of international students and out-of-state residents that might not have gotten the time to get an absentee ballot, we wanted to make sure that they all had the opportunity to at least participate in some election to see who Lindenwood would vote for,” said Regan Cole, the president of LSGA.

LSGA shared the results of the election shortly after their polls closed at 1 p.m..