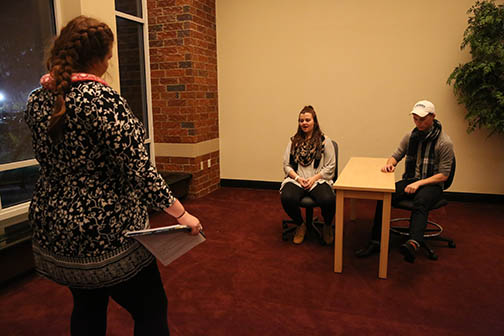 Photo by Carly Fristoe
Laura Schulze and Colby Danner rehearse their skit, a series of blind dates, for the One Acts under the direction of Erin Olson.

Each play, called a one-act, will be about 10-15 minutes long. These acts have been performed at Lindenwood since associate professor Larry Quiggins got his master’s at Lindenwood.

Quiggins said three of his students are directing this year, all of whom are seniors. Erin Olson, Jenna Raithel and Maiken Zoëga-Nielsen are each presenting their plays for Quiggins’ Directing II class.

He said the purpose of the one-acts is to help students advance their directing skills.

“I think the biggest struggle for the student directors is the fact they are working with their peers,” Quiggins said.

He said he’s seen past students cast their friends and then struggle to get them to take their parts in the one-acts seriously.

Erin Olson said the hardest part for her has been taking her actor who has a challenging part and pushing him outside his comfort zone. He plays the role of 15 different people in Olson’s play, a comedy called “Mary Just Broke Up With This Guy.”

Quiggins said the one-acts get students to make critical decisions about casting and scheduling. It helps them learn the directing process on their own from start to finish, because they need to experience it themselves.

Jenna Raithel said this is her second time directing a one-act.

“It’s a lot harder than I thought it was,” Raithel said. “The first time I didn’t get the end result I wanted, so this time around I had the expectation of how much effort I need to put into what I was doing to make it a better show.”

Her play, “Hold for Three,” is between a drama and a comedy. She said these kinds of plays are her favorite.

Quiggins said he helps the directors achieve their own visions of their plays, but he lets them run the plays on their own.

“I let the students pick them,” Quiggins said. “A director has to find a play they like so they can bring forth their vision. It’s a lot more difficult to be handed a play and be told you have to direct this play.”

He said there is a weight that comes from bigger shows that draw in large crowds. In one-acts, students get the chance to try new things and to learn from their mistakes without worrying as much about the outcome.