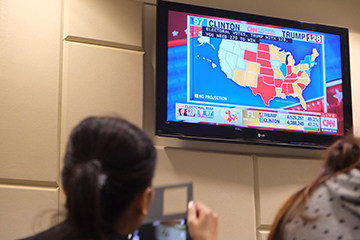 Photo by Nao Enomoto
More than 25 people turned out to watch the election coverage at the Dunseth Auditorium.

As the presidential election results came in state by state, the Young Americans for Liberty of Lindenwood watched anxiously from the watch party they hosted in Dunseth Auditorium.

More than 25 students gathered in the auditorium and snacked on pizza, popcorn and soda as the results came in live on CNN. The United States map printed in this week’s issue of the Legacy served as a way for the students to keep track of which states had been declared as won by Hillary or Trump, coloring in them in with crayon as the results came in.

While there were students present in support for both democratic candidate Hillary Clinton and republican candidate Donald Trump, the majority of the room was rooting for Trump to win the election.

Lindenwood senior Andrew Morrison, a Trump supporter, said that Trump has made him more interested in politics during this election, and that he is a fan of his policies.

“I’m a fan of his economic policies are good, especially his plan to keep money from going offshores, the tariffs imposed to keep jobs here,” Morrison said. “I think that’s a big positive for him.”