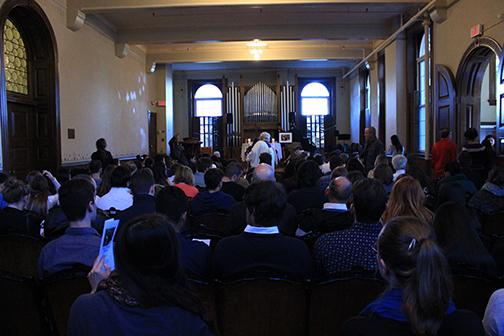 About 250 people gathered in Sibley Chapel Wednesday afternoon to remember Lindenwood student Marianne Olyslager-Maldonado, who died of injuries she suffered in a car crash early Sunday.

Olyslager-Maldonado, 23, of Honduras, was a marketing major at Lindenwood.

She was a passenger in a car that was struck from behind on Interstate 70 near downtown St. Louis. Olyslager-Maldonado was ejected from the car and had been on life support until Wednesday. Three other Lindenwood students in the car also were injured, as was the driver of the other car.

Mourners, including friends, family, students, faculty and administrators, passed a picture of Olyslager-Maldonado as they entered the chapel. People continued to file in even after 4 p.m. when the service started. All 157 seats in the chapel were full, and the overflow stood in the aisles.

Kyle Huelsing, the director of sacred music for Lindenwood’s Catholic Student Union, opened the service by performing “Amazing Grace” with an acoustic guitar.

People who knew Olslager-Maldonado, as well as the Rev. Robert Menner, who conducted the ceremony, read Bible passages in English and Spanish to respect her native language.

During the sermon, Menner involved Olyslager-Maldonado’s loved ones by asking what kind of person she was. People called out that she was “always with others,” “definitely happy,”  “energetic” and always “gave good advice” and listened.

During two moments of silence, sniffles echoed around the chapel, and people could be seen wiping away tears.

Laura Zuniga, who was in the car accident with Olyslager-Maldonado, read “Prayers of the Faithful,” with Jesus Fiallos. Zuniga read them in English first, then Fiallos read them in Spanish.

“In thanksgiving for Marianne, and the many ways in which she touched the lives of everyone around her, memories and experiences, which we now recall silently and with gratitude, we pray,” Zuniga said breaking down.

Father Menner then encouraged everyone to recite the prayer “Our Father” in either English or Spanish, whichever language was closer to their heart, he said.

While sharing the sign of peace, people in attendance embraced one another and kissed each other on the cheeks. Afterward, communion was offered to the attendees who wished to receive it.

As Menner closed the ceremony, he talked about the word adios meaning “back to God.” Then those in attendance all said goodbye to Olyslager-Maldondo by saying adios to her photo, which was placed on the altar.

As people exited the building, they expressed their condolences to the family, then gathered behind Sibley Hall to release white balloons in her memory.

After the release, her parents, Juan Carlos and Patricia Olyslager, spoke of their daughter’s will and personality.

Her mother said in Spanish, “Please remember her as she was, happy and crazy, with a fighting spirit. She had a beautiful heart of gold.”