The second annual Miss Lindenwood was ‘a great success’ 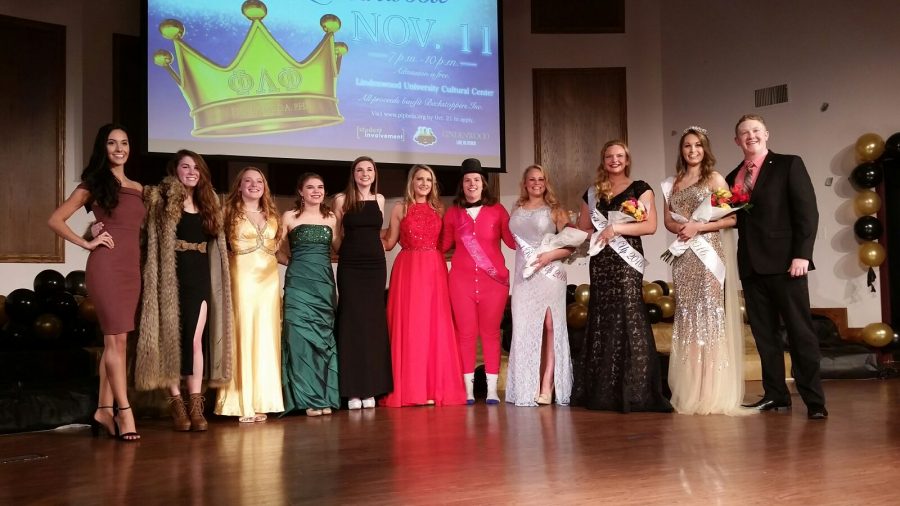 The second annual Miss Lindenwood pageant was held last Friday night at the Lindenwood Cultural Center. The room was littered with black and gold balloons which were each individually blown up by members of .

The night kicked off with an introduction of the judges and then the contestants. There was a total of nine contestants: Marin Cernik, Victoria Dohm, Posy Durr, Lauren Fraley, Katelyn Marshall, Kelsey Orf, Danielle Richter, Sommerlyn Stevens, and Ivy Tinnin.

The contestants competed in three categories: athletic wear, talent, and formal wear along with a personal, impromptu question which each girl selected from a large, gold bag.

Lion Line performed on stage in between each category in order to give the girls time to prepare themselves.

There was also a 20-minute intermission half way through the show to allow members of the audience to go out into the hallway where tables were set up for several raffles and silent auctions. All the proceeds went to BackStoppers Inc., an organization that supports the families of law enforcement, firefighters, and military personnel who lost their lives in the line of duty.

During the talent portion of the night, contestant Ivy Tinnin painted an impressive portrait of Jesus which was auctioned off afterwards for $70. The money from the painting also benefited BackStoppers.

[perfectpullquote align=”left” cite=”Ivy Tinnin” link=”” color=”” class=”” size=”30″]”We were never being super serious; we were just laughing and having a good time.”[/perfectpullquote]After some tough decision making from the judges, the winner, Ivy Tinnin was announced. First runner-up was Sommer Stevens and second runner-up was Danielle Richter. People’s choice winner, Kelsey Orf, was chosen by the audience who bought tickets to place into the jar of their favorite contestant in the hallway.

“It feels good to win,” laughed Tinnin. “I was not expecting to win. I was shocked.”

All of the girls were able to conclude that the night was a great success and a lot of fun. The crowd was engaged the entire night, sometimes erupting with laughter at some of the contestants.

The Miss Lindenwood pageant raised over 800 dollars for BackStoppers.