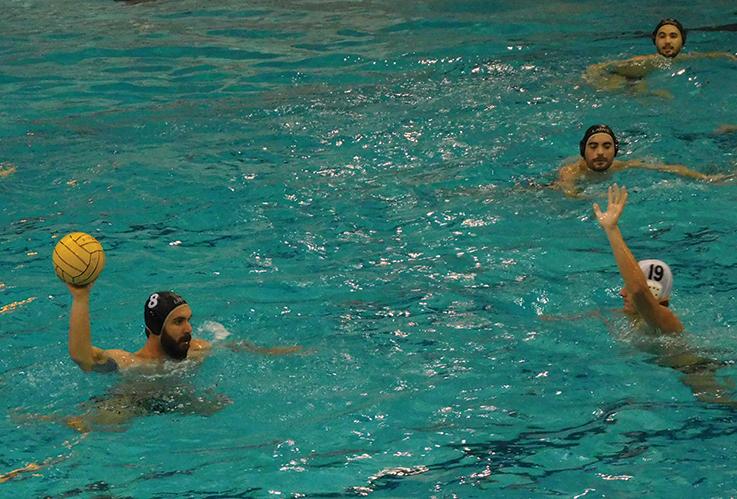 The Lindenwood men’s water polo team took its school slogan seriously when it became “Like No Other” this past weekend.

The Nov. 11-13 tournament took place at the University of Notre Dame in South Bend, Indiana. Coming into nationals, Lindenwood was ranked first in the nation, making it the team to beat.

For the past four years, Lindenwood has made it to the finals of the championship tournament, but only came out victorious in 2014, 2015 and 2016.

In the first game of the tournament, Lindenwood played the host team, Notre Dame, and defeated it 17-7. After a day of rest, the Lions came back on Saturday morning to beat the University of Colorado in the quarterfinals. The final score was 15-3. Saturday evening was Lindenwood’s semifinals match against the University of Michigan, where the Lions won 16-7.

[perfectpullquote align=”left” cite=”Mario Caballero” link=”” color=”” class=”” size=”36″]”They are like my brothers and we made history finally.”[/perfectpullquote]

Then it was time for Lindenwood to make history. On Sunday afternoon, the Lions lined up to play Long Beach University. Coming out of the first half, Lindenwood was tied with Long Beach at three each. Lindenwood goalie Mario Caballero said he was worried coming into the second half with a tied-up game.

“I was kind of afraid because we were starting to lose our mind, to lose our head,” said Caballero. “They were playing much harder than us.”

Lindenwood head coach Dave Miller echoed Caballero’s beliefs that the team members weren’t playing to the best of their abilities.

“We weren’t shooting very well, and we were probably just a little bit tight and that we needed to relax a little bit and get back into playing our normal game,” said Miller.

Lindenwood would come back to score five goals in the third period, leaving the score at 8-4 in favor of the Lions.

Miller explained why he believes the team had such a great comeback in the second half.

“We had a couple breakaway plays, and when they started counter-attacking, they really broke the game open,” said Miller.

Each team would score once more in the fourth, leaving the final score at 9-5. Caballero shared how he felt after that final buzzer.

“I don’t know how to describe it. I felt amazed,” said Caballero. “I am feeling proud for this team and for having these teammates. They are like my brothers and we made history finally.”

Lindenwood player Toni Storic has played on the water polo team during each of its three championship games. He explained that this year was different than the rest.

“This is probably the most resilient group of guys that I have played with,” said Storic.

Miller agreed with Storic, and added, “They are just a great group of young men, and they’re just quality young guys.”

“They are champions, they have the heart of a champion, all of them,” said Miller.