Communications adjunct to be honored by local media group 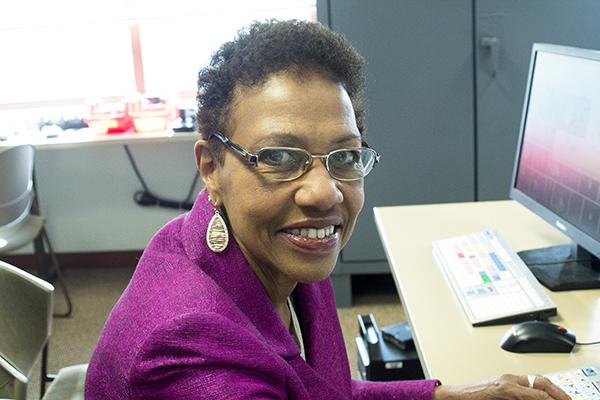 Lindenwood University adjunct professor Sharon Stevens will be recognized by the St. Louis Press Club Nov. 30 as the 2016 media person of the year.

The award recognizes Stevens’ career as a broadcast journalist in the St. Louis market for more than three decades.

“I thought they were calling me to ask me to recommend someone,” Stevens said. “I was very surprised and quite pleased that they wanted to give this award to me.”

“I like the people here,” Stevens said. “The staff and the administration have been very welcoming, and I really enjoy my students.”

She said she finds it interesting to have a mixture of both international and American students in her classes.

She definitely knows how things work in the ‘real world’ and knows what she is talking about,” said Romane Donadini, a French student currently enrolled in Stevens’ broadcasting classes. “She takes our newscast really seriously and is always eager for us to work on stories. I think she wants us to experience what it is like to be an actual broadcast journalist.”

Coming from a family of all teachers, Stevens said she always enjoyed teaching but was not interested in choosing it as a profession at first.

However, “it somehow found me,” she said. “Many people said I was born to do this.”

“Sharon is very interested in making sure that a story is not only told, but told accurately with credible sources,” said Ed Voss, who is co-teaching applied TV news at Lindenwood with Stevens and has known her for many years while working together at Channel 2. “She relates to the students really well. She challenges the students to get better and improve the story that they are writing.”

Prior to coming to Lindenwood, Stevens gathered some teaching experience both at the college and high school level.

Every year, she teaches a broadcasting program sponsored by the National Association of Black Journalists, which Stevens is a member of, at North Carolina A&T State University. She also annually teaches the minority journalism workshop in St. Louis, which is tailored to high school sophomores, juniors and seniors.

Stevens, who originally is from Chicago, said she started her journalism career at age 10, when she went to work for her elementary school newspaper. She then worked for her high school newspaper as well as a community newspaper, and briefly worked for her college newspaper until she switched to broadcasting full time during college at WBBM-AM radio in Chicago.

“So I have been doing this for a long time,” said Stevens.

One of her favorite memories was in the late ‘70s when she got to cover the first presidential campaign of Ronald Reagan for NBC radio in New York.

“That was very exciting and something I always wanted to do,” she said. “I just wanted to be in the mix.”

Stevens worked at KTVI, the now Fox-affiliated TV station, until 1993. She then was hired as an education reporter at KSDK. Besides covering the field of education, she did some substitute anchoring in the mornings.

“I liked the fact that I had a beat and that I could concentrate on a particular area,” she said. “This doesn’t mean that I didn’t do any other stories, so I would not lose my skills as a general assignment reporter.”

Stevens retired from reporting for KSDK TV in 2013 and has been working at the Higher Education Channel as a freelance reporter.

In addition to the press club honor, Stevens has been nominated for two Emmy awards, and in 2010, received the Silver Circle Award from the National Academy of Television Arts and Sciences. She also was elected to the St. Louis Media Hall of Fame in 2011.