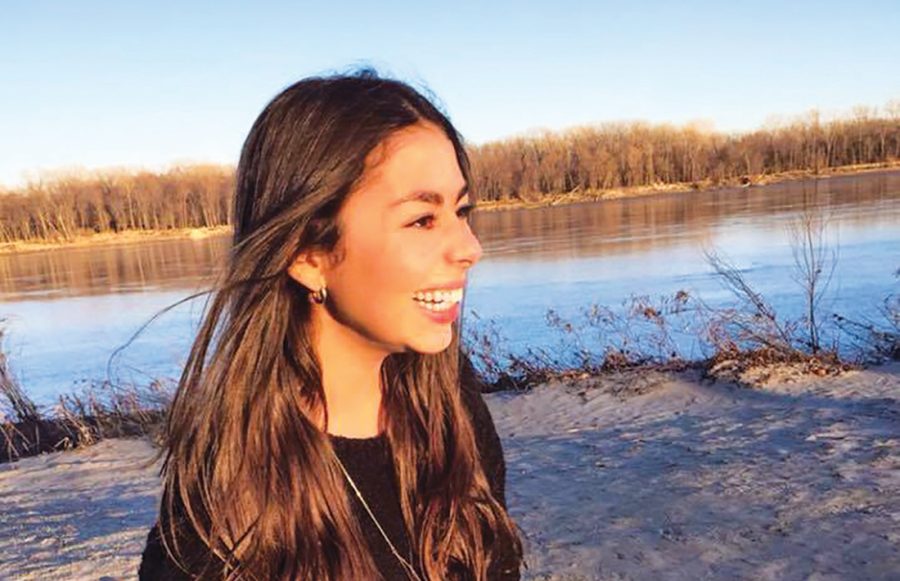 Patricia Olyslager came to see the maple trees outside of Spellmann Center that her daughter loved.

Olyslager had visited Lindenwood’s campus a month ago, but her daughter Marianne had insisted she and Marianne’s father return in the fall. They needed to see the leaves turn on those trees. On Friday, Olyslager climbed one of them, taking crimson-colored keepsakes.

The visit was a bittersweet one; Lindenwood junior Marianne Olyslager died Wednesday due to injuries she suffered in a car crash on Nov. 6.

Her mother and other family and friends gathered by the trees for a group photo. Patricia Olyslager held a photo of her daughter against her chest. Her father, Juan Carlos Olyslager, held his daughter’s urn in his hands.

Despite the events of the past week, everyone wore smiles on their faces.

Olyslager was a 23-year-old marketing student from San Pedro Sula, Honduras. She was headed to a club in downtown St. Louis with friends early Nov. 6 when a car hit them from behind on Interstate 70. She was ejected from the vehicle.

Her boyfriend Ricardo Garcia was with her earlier that night but said he wasn’t feeling well. When friends called asking if his girlfriend wanted to go out, she hesitated, even after she had dressed to go.

“I just told her, ‘You’re already here, you’re already dressed, you look beautiful. Why not go out with your friends?’” he said.

After she left, Garcia said he texted regularly with her, but when she suddenly did not answer, he got worried. Half an hour later, her friend Laura Zuniga called, saying they had been in an accident.

“I cannot describe how I feel because everyone is trying to tell me words to feel better, but they don’t, because they don’t know how it feels,” he said.

On Nov. 6, about 60 people, mostly Lindenwood students and alumni, went to the hospital to stand vigil for Olyslager and another student injured in the crash, who has since recovered.

One of Olyslager’s roommates, Evangelia Vamvas, who went, said Olyslager was kindhearted, generous and always there for her friends.

“She would always listen to you, and she would never say no if you needed her,” Vamvas said.

“She had a great heart,” he said. “She tried to help everyone without expecting anything in exchange. She just did it because that was her.”

Another roommate, Andrea Manzanares, said she remembers Olyslager as a “really spontaneous girl” who was always happy, dancing, joking and making everyone laugh.

“She’s a shining star, and I have never met anyone so happy like she was,” she said.

Vamvas said that Olyslager was in the self-search stage, constantly looking for her “thing.”

Garcia thought that her thing might have been art because she excelled at drawing.

“She had a big imagination,” he said. “She did it because when something was born from her, it was her.”

At a campus service last week, about 250 people packed Sibley Chapel to remember Olyslager and release white balloons in her honor. Mourners were given green bracelets because Olyslager’s organs were donated to save others.

On Friday, as Vamvas and others gathered around the trees that were dressed in crimson and gold, Vamvas said that Olyslager’s death was a reminder that life is fragile.

“Being young doesn’t mean that you’re going to live forever,” she said.

And it was a call to cherish your friends, she said.

“It’s important to grab the people you love and be grateful for them and embrace it,” she said. “Embrace life and celebrate it.”