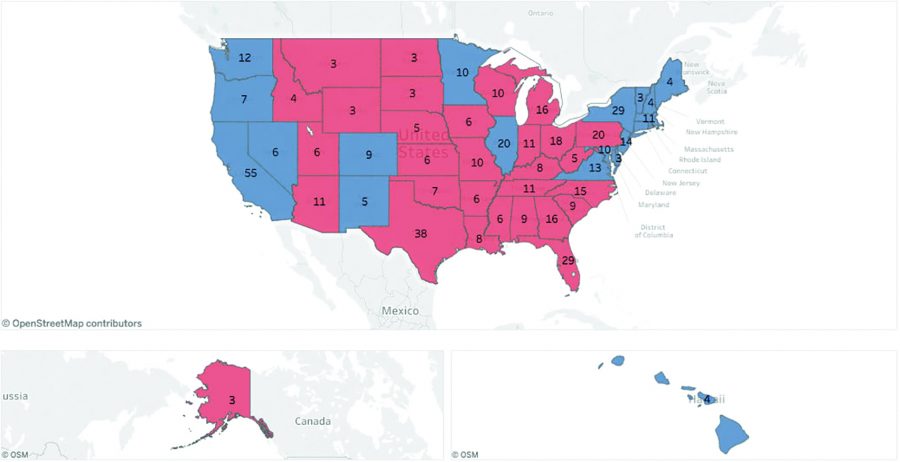 This election has once again proven that the Electoral College is a massively flawed concept. It has been around since 1787, and while it served an important purpose back then, it has far overstayed its welcome and has no reason to continue existing in its current form.

As many Americans know, the Electoral College consists of the 50 states and the District of Columbia. Each state has a certain number of “votes” based on the amount of members of the Senate and House of Representatives the state has, which is related to the state’s population.
Donald Trump won the presidency by 58 electoral votes, which is all that matters in America. But more people actually voted for Hillary Clinton; she won the popular vote by 173,391 votes. But because states with more electoral votes chose Trump, he won the presidency.

Another problem is the “safe states” and the “swing states.” Candidates campaign far more often in the swing states, which are states that could go either way when deciding on a candidate to vote for, therefore completely ignoring many of their potential voters, creating a vicious cycle of safe states being less likely to change their political positions over time.

Although I currently live in Missouri, I am registered to vote in Kansas. I would much rather vote in Missouri, however, because I feel that it wouldn’t be as much of a wasted vote. Why? While Missouri is more of a swing state, Kansas hasn’t voted for a Democrat since 1964. If I supported Clinton, I would be a single Democratic vote awash in a tide of Republican voters, whereas if I supported Trump, my vote wouldn’t mean much because the large majority would also vote for Trump.Some will argue that everybody needs to get out and vote in order to change that, but I think the mere existence of the Electoral College discourages that.

Why would one want to take the time to vote if they know the huge majority of voters could render that person’s vote meaningless? If the U.S. chose candidates via popular vote, I think many more people would get out to vote because they would feel their votes would mean more.