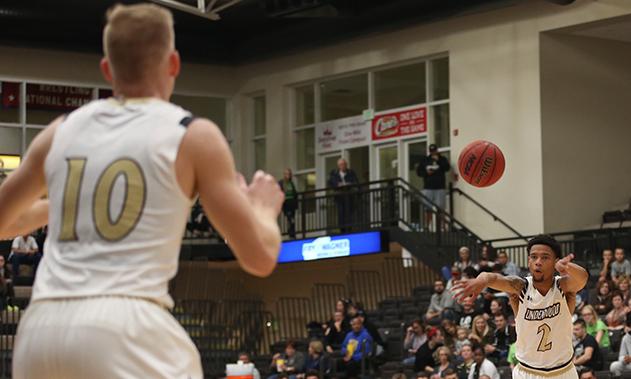 In total, Lindenwood had four players with double-digit points, including double-doubles from both Dominique Dobbs and Brenon Larson-Gulsvig. Jackson Price also finished with 10 points.

“As always, we did a good job sharing the ball,” head coach Lance Randall said. “That’s never a problem for us. Very, very unselfish team.”

Lindenwood dominated in the rebounding department, due in large part to the efforts from both Dobbs and Larson-Gulsvig.

Overall, the team held a 56-28 advantage on the boards. Dobbs led the team with 11, while Larson-Gulsvig pulled down 10.

“Brenon really dominated on the boards for us tonight,” Randall said.

The lopsided victory allowed Randall an opportunity to empty his bench and get extended minutes to his bench players, who ended up picking up a total of 29 points.

Twelve players appeared for the Lions in the game, including the season debut of converted football player Bakari Triggs. He picked up five points in his debut.

Randall said he is glad these types of contests allow him to give playing time to these players.

“It’s important, because to get through an MIAA conference season, we are going to need depth for foul trouble, injuries, various match-ups,” he said. “So we need to continue to develop and build our bench and be able to get those guys some minutes and get them a little confidence.”

Missing from Wednesday’s game was starting guard LJ McIntosh. The reason for his absence was not immediately available.

Lindenwood, now 7-2, will resume their schedule on Monday, Dec. 5 against Brescia University. This will mark the game before conference play begins.