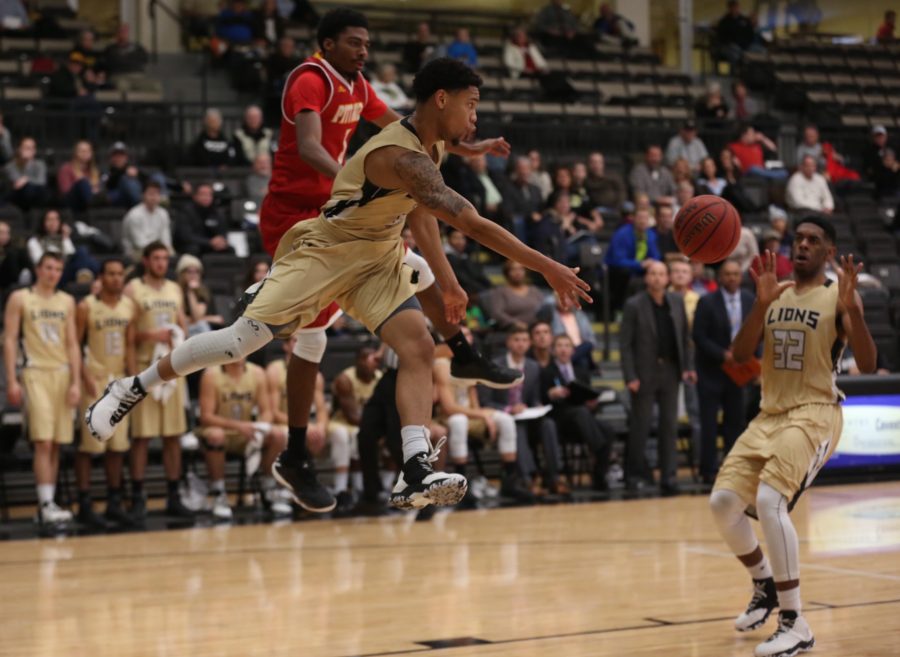 Senior guard LJ McIntosh makes a pass underneath the basket to sophomore Chandler Diekvoss, leading to a layup.
Photo by Carly Fristoe

The Lindenwood men’s basketball team opened the conference portion of its schedule with a thriller, defeating Pittsburg State 89-83.

For the fifth game in a row, sophomore forward Chandler Diekvoss scored more than 20 points, this time collecting a game-high 26 points.

However, Diekvoss did not do it alone. Three other players scored in double digits for Lindenwood, including 21 from freshman forward Brenon Larson-Gulsvig.

“He competed hard for us the whole game,” Randall said.

Larson-Gulsvig was also key in the most critical stretch of the evening. Throughout the second half, Lindenwood had been clinging to a lead of between one and seven points. However, a Pitt State scoring run put them ahead by one point with just over two minutes to play.

On the ensuing possession, the Lions sprinted down the floor, where freshman forward Dominique Dobbs found Larson-Gulsvig opened at the top of the key. He knocked down a clutch three-pointer and put Lindenwood ahead for good.

In the win, Dobbs picked up his fourth consecutive double-double, knocking down 13 points and collecting 14 rebounds. For context, Lindenwood players collectively had seven double-doubles all of last season.

With the win, Lindenwood moves to 9-2 this season, and 1-0 in conference play. Randall said that this type of back-and-forth matchup is what should be expected for the duration of conference play.

“There’s a lot of good teams in this league,” Randall said. “No bad teams. Everybody’s going to give you a punch in the mouth and you’ve got to be able to answer back, and I thought that was what happened tonight.”