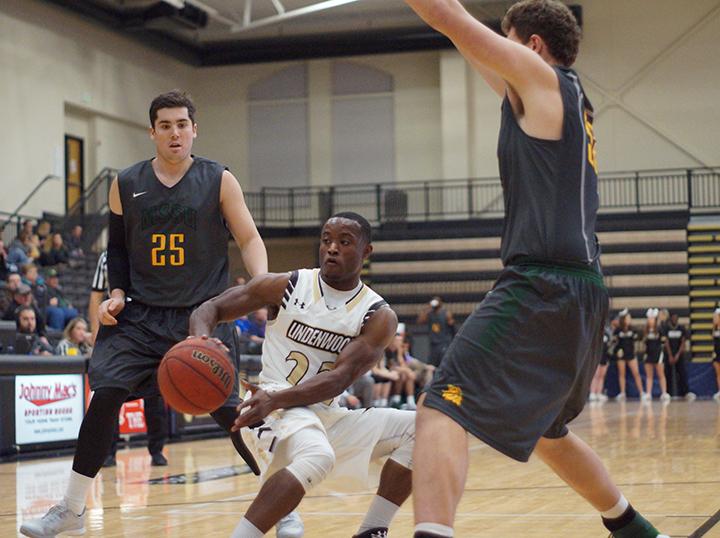 Bakari Triggs attempts to split the Missouri Southern defenders and drive toward the hoop.
Photo by Phil Brahm

Playing their third game in a week, the Lindenwood men’s basketball fell behind early and couldn’t recover, losing to Missouri Southern 71-55.

Shooting proved to be an issue throughout the game for Lindenwood, as the team managed to knock down just 38 percent of its shots, and just 25 percent from beyond the arc.

One of the major problems for the team was the ineffectiveness of normally reliable players such as sophomore forward Chandler Diekvoss and freshman forward Dominique Dobbs.

Diekvoss was only able to score two points, and turned the ball over five times. Dobbs scored eight points, but only managed to pull down 5 rebounds, one of his lowest totals of the season.

“They out-worked us and out-moved us,” head coach Lance Randall said. “I didn’t like the way we competed in the second half. They just man-handled us and there wasn’t a whole lot of resistance either in transition or in the half-court.”

One major point of frustration came in the first half, when Missouri Southern committed the first six fouls of the game, forcing both of its starting forwards to sit on the bench.

Randall felt like his team failed to take advantage, leading to a larger deficit.

“We didn’t take advantage of their bigs being out of the game, and they actually seemed to gain a lot of energy from their bench during that stretch.”

He also expressed displeasure over his team’s free throw shooting. For the game, Lindenwood only converted on six of their 14 free throw attempts.

The team has a week off until its next game, which will take place on the road against Washburn University on Dec. 17.