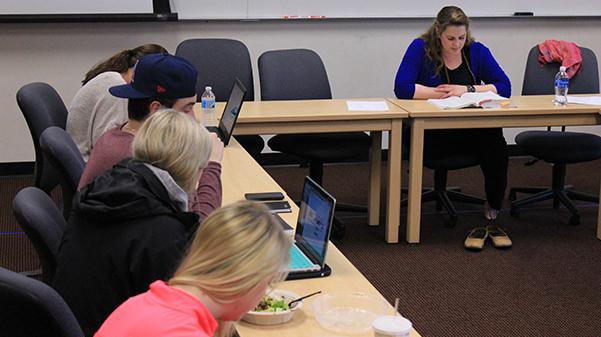 Turner-Jones, 41, started as an adjunct professor at Lindenwood in the spring of 2014. Currently a full-time professor, she mainly teaches stage movement, stage voice and literature classes. She said they require very different teaching approaches.

“Movement is not intellectual,” she said. “It’s about space and energy and ensemble and the body, and literature is a very different approach.”

Emily Jones, the chair of  the theater department at Lindenwood, asked Turner-Jones to join the staff.

“She’s kind and giving and strong and immensely passionate about theater,” Jones said. “She’s a healthy balance and presence for a busy BFA program.”

Besides Lindenwood, Turner-Jones also teaches at Webster University, where she got her bachelor’s degree in literature in 1997. She was initially a musical theater student but was cut after her sophomore year. After graduation, she was planning to pursue a master’s degree in literature but instead went to London Academy of Music and Dramatic Art for a postgraduate classical acting program to reawaken her desire to pursue acting.

“I thought if I’m going to do actor training, I knew it was the only place I wanted to do it,” she said.

There was a reason. In high school, sometimes when she was onstage she could feel something else was taking over, something bigger than her. Something she would describe as “more universal quality of what it is to be human.”

“And often I wouldn’t feel adrenalized,” she said. “I would feel calm. You know extra calm and sharp and capable, and I think honestly most of my life I’ve spent wanting to understand what that is.”

She later encountered that feeling with writing as a literature student, teaching and practicing various art forms. She ended up staying in England for 10 years, during which she found her another field of focus — movement.

Turner-Jones said movement is important for actors because it gives them flexibility through working with musculoskeletal and nervous systems and ultimately, creates a calm, engaged and flexible actor.

“If they instead associate the stress and terror for many of us going on stage with being relaxed, being centered, breathing comfortably, having all of the primary breathing muscles relaxed, then that’s what you’re going to get,” she said.

Rossi said that what is different about Turner-Jones compared to other professors is her understanding of what students go through and flexibility in teaching.

“She’s like ‘I know we can get this done, but you guys come first,’” Rossi said.

Turner-Jones said that she does that to “be available to what’s happening right now” because it might present an opportunity to learn, discover or engage in something.

“So I plan just enough, and I’ve started to know how much I need to do in order to go in, ‘OK, I can manage this all the way to the end, and there’s still going to be space.’”

She said the most rewarding experience as a professor is to know as much about the students as she can, see students come out of their shells and discover something new about themselves.

“I feel blessed, like profoundly blessed, because I have some of the most beautiful interactions with students and other faculty members,” she said. “And I mean they’re countless. At the end of every semester, as we finish final exams and wrap things up, you know, shift to move to something else. The kindness that’s offered. The gratitude. The warmth of those relationships. It’s really, really gone very deeply into my heart.”