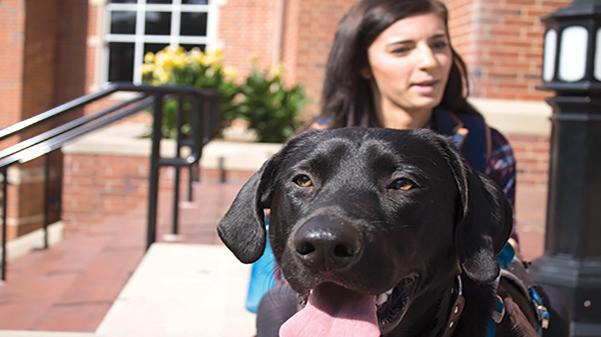 Alayne Beshey and her service dog Iink outside of the Spellmann Center.
Photo by Mili Mena

Beshey is a transfer student from Iowa who is a member of LU’s cycling team.

Iink — pronounced “ink” but spelled with double “I” because he is the second one with the name — is Beshey’s second dog. Her first dog died when Beshey was 14, the same age she was diagnosed with depression.

Beshey said her she never realized the emotional stability a dog gave her until she got Iink a year ago as a Christmas gift. She was diagnosed with anxiety and depression, but her medication was not working for her. When she got Iink, she said she felt stable again. She said her relationship with Iink provided her with love and comfort, allowing her to wake up every day and no longer feel she needed the medication.

“That bond I have with him, it’s kind of a safety; he needs me as much as I need him,” she said. “The routine we have together every day, it’s like we rely on each other.”

Beshey said her mental health has to be as strong as her physical health, especially in a competitive level as part as the cycling team.

“I have seen a great deal of improvement in my performance as an athlete by having him,” she said.

Beshey said both of her roommates agreed to have Iink in their home, and they love having him.

“A lot of people relate to an emotional -support animal,” she said. “I suppose that just goes back with history, kind of when we were domesticating them. It’s just a natural bond humans have always had with dogs.”

Associate Professor Ann H. Ross said dogs are a source of support and unconditional love. Ross has facilitated groups with The Wellness Community, which serves those diagnosed with cancer and their caregivers. She currently uses her dog Tinky as a support for her clients during therapy.

Joseph Cusumano of the Student and Counseling Resource Center at Lindenwood, said emotional-support animals provide comfort in the form of affection and companionship for people suffering from various mental and emotional conditions, such as anxiety, depression and bipolar disorder.

He said emotional-support animals are typically dogs and cats, but they may include other animals.

Students are required to have special permission from an outside-campus psychologist or psychiatrist who believes that this person needs that level of care and help, which allows them to have an animal on campus.

Students who would like to make a formal request for a service or assistance animal should contact Jeremy Keye, student support and accessibility coordinator.

Keye said 15 students have an emotional-support animal on campus. The animals are not permitted in classrooms, the library, food service areas, labs, student center or on sporting arenas.
Beshey said Iink has been an unconditional companion.

“For me personally, he is an alternative to taking medication,” she said. “It works with my brain the best so that I can function normally.”