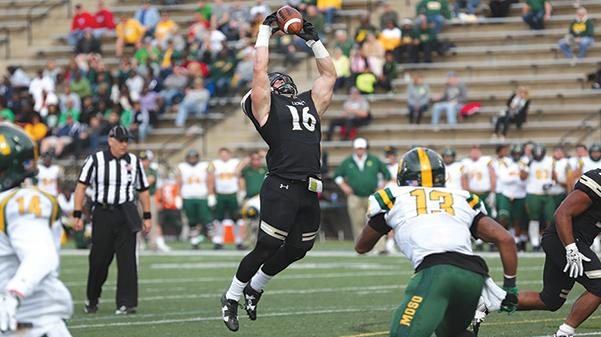 In a November 2016 file photo, Connor Harris contributes to a 42-28 win over Missouri Southern State University.
Photo by Carly Fristoe

Since ending his senior season as the NCAA’s all-time leader in career tackles, the life of former Lindenwood linebacker Connor Harris has been a true whirlwind.

Harris completed his master’s degree in criminal justice in December, and he and his wife Marissa moved to Indianapolis so he can train for the NFL draft in April. Indianapolis is where Exclusive Sports Group is located, the agency which Harris has chosen to represent him throughout the draft process as well as his professional career.

While training has gone well, Harris said it is very different than anything he has done in the past.

“We’re just spending a lot more time focusing on all of the little details,” Harris said. “It’s completely different than normal football prep work because you’re training for individual drills instead of matchups.”

At the time, Maccagnan said that Harris was being scouted as an inside linebacker at the professional level. Throughout college, he played middle linebacker.

“He moves around very well from what I can see,” Maccagnan said at the game he attended. “He looks like he is a pretty athletic inside linebacker. I know our scouts have already kind of evaluated him, so he may have some opportunities here going forward.”

In addition to the recognition he is receiving from professional organizations, Harris got one more accolade for his collegiate performance at the end of 2016, when he was honored with the Cliff Harris Award. It is given each year to the top defensive player at either the DII, DIII or NAIA level.

He became the second Lindenwood player to receive the award after former cornerback and current Seattle Seahawk Pierre Desir won the inaugural award in 2013.

“To get the same award as [Desir] is huge,” Harris said. “Not only is it huge for me, but also for Lindenwood.”

Desir said Harris deserved the award for how well he played throughout his five years at the university. While NCAA eligibility is normally limited to four years of play, Harris was allowed an extra year of eligibility due to an injury he sustained in the third game of his sophomore season.

“Anyone who has seen him compete over the last few years can tell how special he is,” Desir said.

On top of receiving the 2016 Cliff Harris Award, Harris also recently received invitations to both the NFL scouting combine as well as the Senior Bowl, which is the top all-star game for draft prospects.

“There just aren’t that many guys from this level that get these types of opportunities,” Desir said of Harris. “It really shows his level of skill and dedication.”

Harris will become just the fifth MIAA player to participate in the Senior Bowl, and Lindenwood will become the first school from the conference to send multiple players to the game. Harris said he is continuing to take this process day by day and that he is keeping his expectations low as a way of keeping himself grounded.

Desir believes that Harris has all of the skills to succeed throughout this process and at the next level of gameplay, but offered his former teammate some advice.

“Have fun and just enjoy the process while still working hard,” Desir said. “If he can continue to do those things, there is no reason why he shouldn’t be successful at the next level.”

As for Harris, although he admits the draft process can become slightly overwhelming at times, he said it is the type of opportunity he has always wanted.

“I’ve been dreaming about doing all of this since the day I started playing football,” he said.