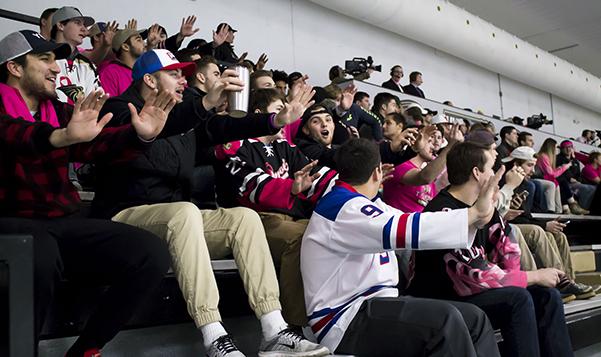 Members of various Lindenwood athletic teams came out to the Pink the Rink game to show their support.
Photo by Kelby Lorenz

The women’s ice hockey team raised $2,300 during its fifth annual Pink the Rink game last weekend against the Syracuse Orange.

Drew Hill, event management coordinator of Lindenwood, said last year’s event raised $2,000, and this year’s aim was to clear that mark. Over five years, the event has raised over $12,800 accumulatively.

“Our overall goal is to simply raise as much awareness as possible,” said Hill. “If we can fill the arena, then we’ve done our job. The more people learning about breast cancer, the better.”

Fundraising efforts included T-shirt sales, a 50/50 raffle, a “chuck-a-puck” contest, as well as an auction of the Lions’ game-worn jerseys. The proceeds from Pink the Rink will be donated to Gateway to Hope, a local foundation. The organization’s mission is to secure comprehensive care and provide financial assistance to those who have been diagnosed or are at high risk for developing breast cancer.

The Lindenwood ice arena was decked out in shades of pink, from the blush-covered balloons to the carnation-colored ribbons. The Lions themselves wore fuchsia jerseys accented with the Lindenwood black and gold.

Fans packed the stands, including members of several sporting teams who cheered spiritedly during the game. Dawn Van Houten, executive director of Gateway to Hope, dropped the puck in a ceremony before Friday’s game.

Lindenwood lost the game 5-0. Syracuse controlled the game during the first period, leading 3-0 at the first buzzer.

In the second, both sides failed to score. The Lions entered the final period trailing 3-0, and after a total of 60 minutes of play, lost 5-0.

Lindenwood lost the second game of the series against Syracuse 3-0 on Saturday, bringing the Lions’ record to 5-16-2 and 3-8-1 in conference play.