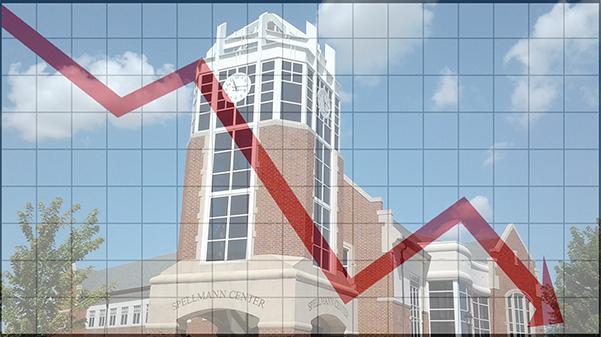 Decreased enrollment for the 2016-17 academic year will cause an estimated $10-14 million shortfall in Lindenwood’s operating budget, according to university officials.

Enrollment has dropped between 5 and 6 percent across all of Lindenwood’s campuses, according to Lindenwood Provost Marilyn Abbott. She said at a faculty meeting Jan. 25 that the decline is a result of downward enrollment trends being seen at universities across the country.

In the fall of 2016, Lindenwood’s St. Charles campus saw a drop of nearly 5 percent in total enrollment. Undergraduate day admission held the biggest decline, falling just over 6 percent. Spring enrollment is also down about 5 percent.

“We had projected or assumed certain enrollments, and those haven’t played out for us, so we are looking at our spending, budget and financial plan,” Phelps said. “We are adjusting accordingly.”

Tuition, along with housing costs and other fees, currently account for more than 92 percent of the university’s revenue, according to Phelps. He said that despite the shortfall, the university is not in any immediate financial trouble.

With sales pending on its facility in Dardenne Prairie, which formerly housed the nursing program, and the Linden Wood Club on Old Friedens road, in St. Charles, Phelps said the university expects to bring in about $10 million in revenue. He added that returns on other investments will also add to the total.

Overall, Lindenwood’s endowment sits near $140 million, according to tax documents from the fiscal year that ended on June 30, 2016.

“We are not in debt by any stretch of the imagination,” Phelps said. “That doesn’t mean that we as administrators or the board of directors don’t have a fiduciary responsibility to make sure we are wise with how we are operating the university.”

[perfectpullquote align=”left” cite=”Marilyn Abbott” link=”” color=”#f8de91″ class=”” size=”24″]“We are doing a lot of things to try to grow our enrollment, and we feel we will see some results,”[/perfectpullquote]

At last week’s faculty meeting, Abbott said one way the university was tightening the operating budget was by eliminating 10 faculty positions. Eight positions will be reduced through attrition, and two other faculty members have been notified that their contracts will not be renewed.

At the same time, multiple personnel positions will be added to high-demand and newly formed degree programs in hopes of boosting future enrollment.

“We are doing a lot of things to try to grow our enrollment, and we feel we will see some results,” Abbott said at the meeting. “If it becomes clear later in the spring and early summer that it’s not the case. then we might have to make some further adjustments.”

A tuition increase has not been ruled out, but Abbott said if a proposal is made, “students will receive the information as soon as possible.”