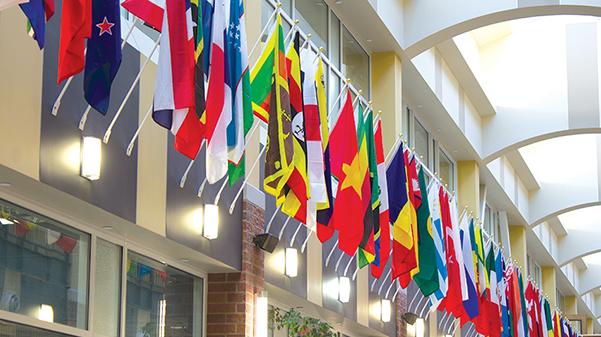 The atrium in Lindenwood's Evans Commons is lined with flags from around the world. There is a flag for each country represented in the university's student body.
Photo by Romane Donadini

Twelve percent of undergraduates at Lindenwood are international students, including some Iranian students who could now face complications while traveling under President Donald Trump’s recent executive order.

Protecting the Nation from Foreign Terrorist Entry into the United States is an order that suspends immigration from seven countries—Iran, Iraq, Syria, Sudan, Libya, Yemen and Somalia.

Emin Hajiyev, the director of the Office of International Students and Scholars, said that the school is currently suggesting students stay in the country until the order has been reviewed, especially with spring break approaching.

“Right now we are in between on the recruitment season, so it’s too early to tell if we have been affected,” said Hajiyev. “Hopefully, in the long run, the international student recruitment overall will not be affected.”

He went on to say that he hopes it does not have a domino effect onto students from countries not included in the executive order.

According to the National Association for Foreign Student Advisors, in 2016 there were 1,043,839 international students in the United States, 24,171 of those students are at universities in Missouri. This is almost a 12 percent increase from the previous year. NAFSA will be holding a town hall meeting to discuss tools in fighting stereotypes on Jan. 31.

“We would like to assure all the students that the Office of International Students and Scholars, and Lindenwood in general, has always welcomed international students from all over the world and we will try our best to remain a global family,” Hajiyev said. “We are observing and analyzing the current events and will issue additional guidance.”