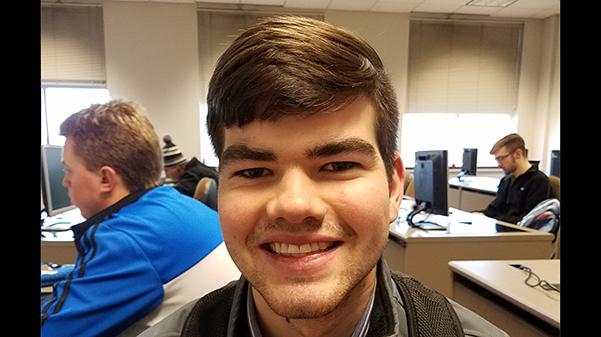 Freshman DJ Roy, a fourth-degree black belt, has found a new community with martial arts, and said he plans to base a career off it.

A communications student, 18-year-old Roy has been practicing martial arts since he was 5 and advocates that martial arts can boost mental health. What first attracted Roy to martial arts was the mental health appeal, he said, because it has been a successful way for him to cope with stress.

“When I get really stressed, working out relieves it,” he said. “It really helps me mentally more than physically, it just keeps you stable.”

Roy said he was the first student at his taekwondo school. Since 2006, Roy has attended ATA with Master Shank in his hometown Chesterfield, Missouri.

“I feel as if I am the backbone of the place; I always think what if I left?” he said.

Over the course of Roy’s life, ATA has become a strong community for him. His instructor often tells him “I can’t picture a day when I walk in and you’re not there,” Roy said.

Martial arts has taught Roy a lot about himself; he now defines himself as a determined student and hard worker.

Eventually, when Roy transitioned to a teacher, he realized his true passion — to teach kids about the mental and physical benefits of martial arts.

“When you see little improvements, I realize I’m actually causing that, helping them,” Roy said.

He focuses on teaching the Tiny Tigers, kids ranging in age from 3 to 6, about basic moves and how to defend themselves against strangers.  As a teacher, Roy does not consider the kids, or even the martial arts the most challenging part.

“The hardest part is names,” he said. “My first day of teaching the main goal was to learn as many names as possible.”

Roy showed his commitment to his hobby when he chose a university to attend senior year of high school.

“I came to Lindenwood because it is close to my taekwondo school,” he said.

Roy takes his job very seriously, he said, because parents are paying for the service he provides. He chose his major because communications helps him be a better teacher for both the students and parents.

“[Communications] is not necessarily just talking in front of people, it’s about how you talk,” Roy said.

One of Roy’s goals is to consistently become a better teacher every day.

“There is always something new to learn,” he said. “Even my instructor, a sixth-degree black belt, says every day he learns something new.”

Master Shank and Roy have attended martial arts teaching seminars in Jacksonville, Las Vegas and California. ATA’s motto is “to create tomorrow’s black belt leaders,” and both Master Shank and Roy are working very diligently to achieve that. Currently the school has 280 active members, including 65 Tiny Tigers that Roy teaches. But Roy hopes to more than double attendance and work full time at ATA after he graduates.

“I want to be completely in charge of the little kids,” Roy said. “Someday I want to have 150 Tiny Tigers.”

Roy said he can’t picture his life without taekwondo.

“It’s going to be apart of my life forever; no matter where I am,” he said.