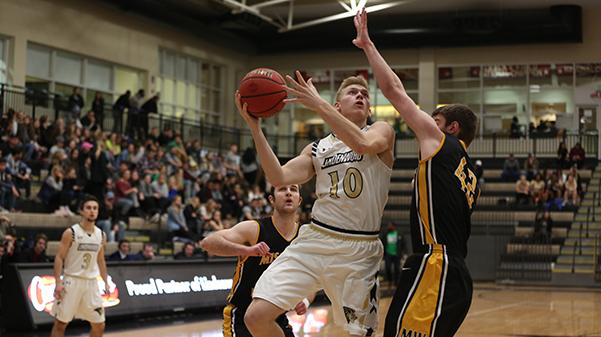 Chandler Diekvoss goes up for a layup against a Missouri Western defender in a conference game on Feb. 2.
Photo by Carly Fristoe

The Lindenwood men’s basketball team came up with a dominant 101-76 victory on Tuesday night in St. Charles.

Diekvoss was appreciative of the dimes threaded by guard combo Adam Pohlman and LJ Mcintosh who combined for 12 assists and 0 turnovers on the night.

“LJ and Adam did a good job of taking care of the ball and making sure we pushed in transition to keep the pace in our favor,” Diekvoss said.

Diekvoss was joined in his scoring efforts by forward Dominique Dobbs, who found the back of the net 7 times on 12 attempts as he put up 21 points and 8 rebounds. Dobbs asserted himself in the post and consistently outmuscled the Eagles.

Guard Adam Pohlman was happy with the win, the effort from his big men, and was already looking to the Lions next game, a MIAA clash with Lincoln University of Missouri.

“I thought we played to our strengths and exposed them down low,” Pohlman said.
“We started a bit slow but started to get some stops on defense and get out in transition in which led to easy buckets. It was a good win for us moving forward and we need to keep it rolling into Saturday at Lincoln.”

The Lions outscored the Eagles 58-34 in the paint.

The result never looked in doubt for the Lions as they lead for all but 1 minute and 52 seconds of the game. The Lions bench led by Pohlman, Landon Mills and Zac Haese, provided some spark as they combined for 31 points.

The non-conference victory sees the Lions move to a 17-10 overall record on the season. They next face Lincoln University of Missouri in Jefferson City on Saturday at 3:30 p.m. in a MIAA conference game.