Celebrity chef uses checkered past to cook up success 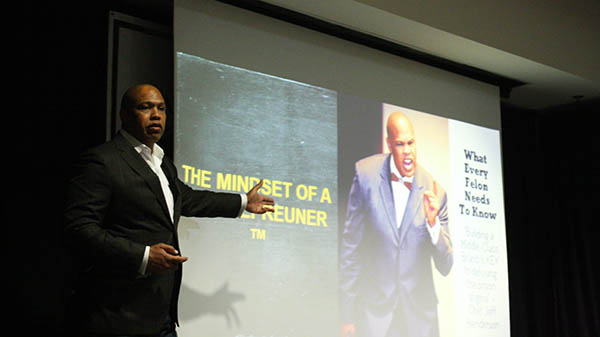 Jeff Henderson speaks to the crowd during his presentation in the Anheuser-Busch Leadership Room on Feb. 9.
Photo by Matt Hampton

Celebrity chef Jeff Henderson has never forgotten that he once was a drug dealer and spent a decade in prison or that he used to be employed as a dishwasher.

He takes none of his success for granted because he knows that failure can arrive in the blink of an eye.

Henderson spoke at Lindenwood last week as part of an event sponsored by the Hammond Institute of Free Enterprise aimed at bringing people together to de-stigmatize criminals and giving everyone the tips and tools they need to succeed in the business world. And in a room filled with successful individuals with incredible stories of perseverance and hard work, it was Henderson who brought everyone to their feet by the end of the evening.

The odds of Henderson, now affectionately referred to as “Chef Jeff,” ever reaching that stage, or really any stage, were slim to none. As he put it, “the pipeline to prison began the day I entered the world.”

Henderson was born in 1964 in one of the worst neighborhoods in south-central Los Angeles. From birth, he was exposed to rampant gang violence, extreme poverty and a community always seeking its next high.

As far as he could see, the only way to gain success, to get ahead in the world, was through crime. The only people in his neighborhood living above the poverty line were those who were either pimps, pilferers or drug dealers.

“The school system never taught me I could be a baller using math or science,” Henderson said.

He saw school as more of a time-consuming waste that would serve him no purpose later in life. While high school teachers stood at the front of the room using outdated textbooks to teach him about grammar or United States history, his mind raced trying to figure out the best way to brand the cocaine he was selling and the best way to attract new customers.

“I had the mind of an entrepreneur; I just didn’t know that’s what I was doing,” Henderson said. “I didn’t know terms like branding, marketing or strategizing. I was just trying to make money.”

In fact, he never used any of the drugs he was selling. He didn’t drink and he never smoked cigarettes.

“My addiction was money,” Henderson said.

At his peak, Henderson was making more than $35,000 every week selling crack cocaine. He was part of an epidemic that was building him up while simultaneously tearing down the rest of his community and countless others.

“I was making more money than doctors or lawyers could ever dream of,” Henderson said.

Then it all came crashing down.

In 1987, he was arrested for conspiracy with the intent to distribute drugs. He spent more than a decade behind bars.

Although his years in prison were far from a walk in the park, he believes it was there that he found his true purpose.

“I needed prison to discover myself,” he said.

During those years, he found his passion for cooking and became the head prison cook, learning how to turn a standard box of ramen noodles into a dish the entire prison population clamored after. He has since redesigned that dish in his restaurants.

It was also in prison that the group he called the “Wall Street Boys” discovered his natural entrepreneurial abilities. They encouraged him to take advantage of both his culinary and business skills when he finally got out of prison. And that he did.

Upon his release, highly acclaimed chef Robert Gatsby gave him a job as a dishwasher in his newest restaurant in Beverly Hills. From there, he made his way onto the preparation station and eventually onto the cooking line. His talents were undeniable.
[perfectpullquote align=”full” cite=”” link=”” color=”” class=”” size=””]“I needed prison to discover myself.” -Jeff Henderson[/perfectpullquote]
After earning his stripes, he moved to Las Vegas, where he was fortunate enough to become the first African-American to be named the head chef at Caesars Palace. He also won the award for being the Chef of the Year in 2001.

His success story became a book, titled “Cooked,” which landed him a spot on the Oprah Winfrey Show in 2007. His book went on to become a New York Times bestseller, and he attained more success than most would ever dream of. He has written additional books and been featured on numerous television shows. His story has been purchased by Sony for a future motion picture.

“I never chased the book deals, television, any of it,” he said. “None of it would have been possible without hard work. I never take any of it for granted.”

He has no plans of slowing down anytime soon, either. “Chef Jeff’s” mind is always racing trying to come up with new ideas that will lead him to even more success. His addiction to money is just as strong now as it was on the street corners in the early 1980s.

“The mentality is still the same; I’ve just changed the product,” he said.