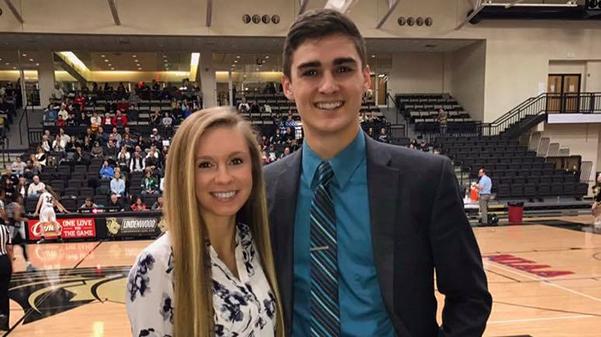 “I’m excited that we won!” Bach said. “It was all Andrew; he was the one that signed us up. Andrew loves a contest, and winning anything always gets him super excited.”

Rogers said he also is excited to celebrate the night with his “favorite girl.”

Rogers is from Ballwin, Missouri, and Bach is from Cedar Hill, Missouri.

Their favorite Lindenwood moments are when they broadcast Lindenwood basketball games together, and that is also how they met.

It happened around this time last year at the men’s and women’s Lindenwood basketball games when Rogers was broadcasting the women’s game, and Bach was a sideline reporter for the men’s, Bach said.

[perfectpullquote align=”right” cite=”Marina Bach” link=”” color=”#f8de91″ class=”” size=”26″]“Being able to broadcast every home game together brings us closer together, and we always have fun doing it.”[/perfectpullquote]

“We always ran into each other and had casual conversations after each game,” Bach said. “Now this year we are broadcasting together. Andrew is the commentator for the men’s basketball games, and I’m the men’s side reporter again this year. We both have a love and passion for broadcasting and watching sports.”

Both said that it was the kindness and “going out of their way” to make others happy what made them fall in love with each other.

“Everything she does for me makes me fall for her more and more,” Rogers said. “Whether it’s getting me ice cream — I love ice cream — or going out of her way to do the little things, she never fails to put a smile on my face.”

Bach said that Rogers is “an amazing man” and her best friend.

“He goes out of his way for his friends, family and me,” she said. “Andrew always strives to be the best that he can be and is always giving a helpful hand to everyone around him.”

Even Valentine’s Day, they are going to spend broadcasting the sport together.

“Being able to broadcast every home game together brings us closer together, and we always have fun doing it,” Bach said.

Bach and Rogers will get a prize package that includes two tickets to the Vanessa Williams concert at the J. Scheidegger Center in April and a private dinner cooked by Chef Steve Giuffrida.

Seven couples participated in the competition, and the voting took place on Lindenlink.com from Feb. 8 through Feb. 11.