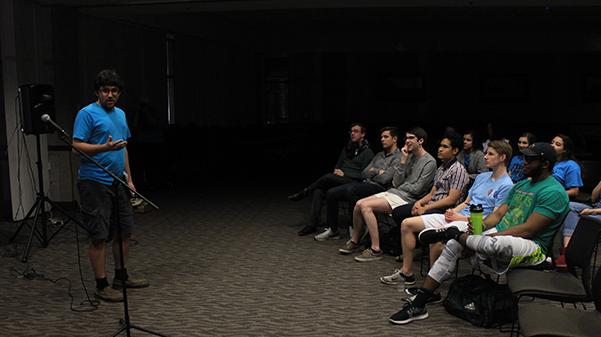 Campus Activities Board gave the mic to the students of Lindenwood  in a night of self-expression at Lion’s Lyrics event.

The event, which took place on Feb. 21, welcomed all students who wanted to have their voices heard, according to Campus Activities Board Events Director Kayla Drake.

The event took place in the Anheuser Busch Leadership room in the Spellmann Center starting 7 p.m. ans was a part of CAB’s Diversity Week events. The night started with four students voicing themselves in front of an about 30-people audience.

Eric Button was first. He shared his personal comedic story when he went to the Ameristar Casino once. Button thought the night was a great experience.

Alyssa Hawkins performed the second with a personal, spoken word poem “The Day I Was Told I Wasn’t Beautiful” It was followed by Evan Collins’ performance of an original rap.

The final student performance was by Kersten Mealbauer who sang and performed two cover songs Imagine Dragons’ “Radioactive” and Vance Joy’s “Riptide” on her guitar along with her original song “Indescribable.” The main act of the night was professional spoken word artist Odd?Rod.

He named himself Odd?Rod because he “was going against the odds” by surviving his poverty-stricken upbringing and following his dreams. Odd?Rod required the room to be set up with chairs in a half circle that surrounded his seat in the front. His purpose for doing this was to make the event more personal and intimate.

“We are a family now,” said Odd?Rod during his performance.

His performance consisted of him telling his life story to the audience and performing his poems, which were all memorized and intertwined into the story. Odd?Rod’s story began with his childhood and how he was raised by a crack addict mother and an absent father. He also spoke about how his older brother died when he was young.

“I started writing poetry so I wouldn’t kill myself,” said Odd?Rod. “Poetry saved my life.”

He made sure to stop multiple times during his story to take any questions from the audience in order to create a connected and open atmosphere. Odd?Rod had many important messages in his performance but there was one that was the most important to him.

“It is completely fine to be yourself,” said Odd?Rod. “Being different is in. I tell everyone to be themselves.”