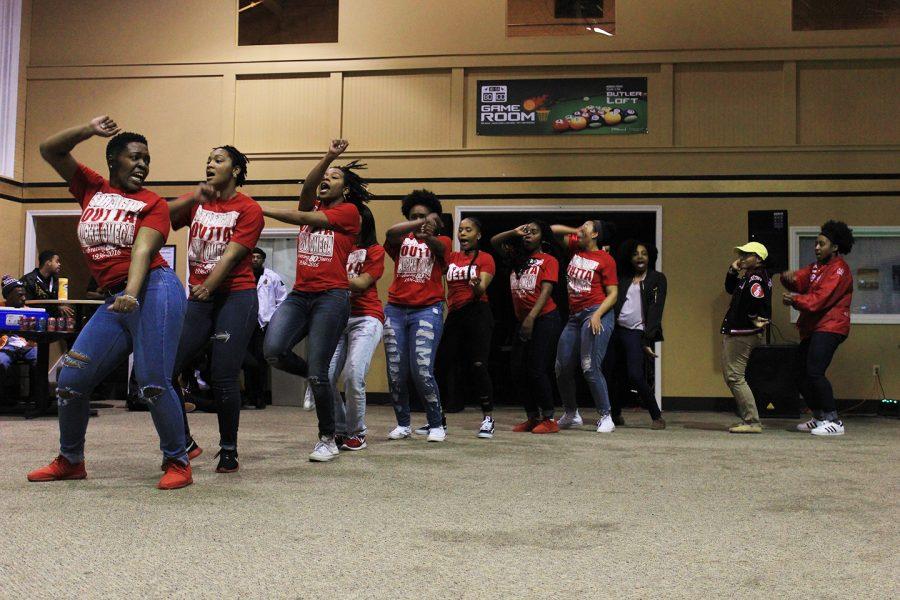 Stepping is a form of dance which involves fervent rhythmic stomping, clapping, and slapping.  Taylor Musgrove, Lindenwood Black Student Union’s Vice President and member of Alpha Kappa Alpha, said stepping is very important among black Greeks.  She described it as “basically making choreography without music.” Strolling is a similar activity, but is performed to music.

“The main part of Black Greek organizations is service, giving back to the community, but this is like the fun part where we get to stroll, interact with each other, and make up steps,” Musgrove said.

After the Yard Show, there was a party with the Greeks and the people who attended.

All of the organizations that were a part of the event are city-wide chapters, not chartered at Lindenwood.  They hold events at a lot of different universities in the area, but they haven’t had that many at Lindenwood.

“We wanted to change that this year and bring more black Greek events to Lindenwood’s campus and so this was a great way to do it for Black History Month to have a yard show where everybody is represented,” said Musgrove.

Every seat in Butler Loft was filled due to the tremendous attendance at the Yard Show, with visitors standing and sitting in every corner of the room.

“This is probably the biggest it’s ever been,” said BSU President Allen Mitchell, “Publicity for this one is a lot higher than it has been, which is obvious by the number of people in the room.”

Musgrove said the event was heavily promoted on social media as well as through flyers and word of mouth, and they also held a meet and greet with the organizaions during lunch on Monday.

The purpose of the Yard Show was to raise awareness of black culture and black fraternities and sororities.

Freddie Brown, a senior at Harris-Stowe State University and former president of their chapter of Phi Beta Sigma, thinks that organizations like his often do not have enough visibility.

“From what I see, it’s Greeks on Lindenwood Belleville Campus, and this campus as well, that a lot of people don’t really know, so events like this are pretty much to keep them aware and everything,” Brown said.

The BSU Yard Show event was a part of the Campus Activities Board’s Diversity Week. The week will end Friday with “They Call Me Q” one-actor play performance in the Butler Loft starting at 7 p.m.