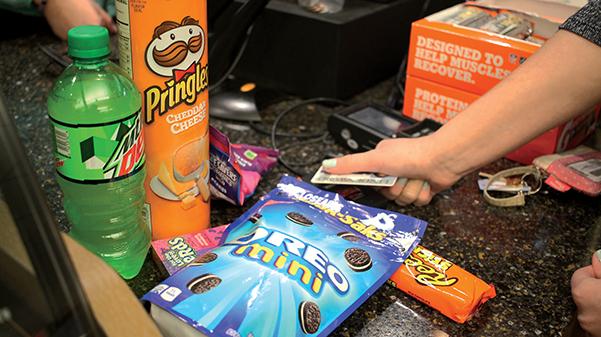 A student purchases a wide array of ‘junk food’ with her dining dollars in the convenience store on the second floor of the Spellmann Center.
Photo Illustration by Kelby Lorenz

A recent study is making mincemeat of the “Freshman 15,” the widespread belief that students gain 15 pounds in their first year of college.

The study, published in December and conducted by Charles Baum, an economics professor at Middle Tennessee State University, states that freshmen gain an average of just 1 pound during that year.

Tiffany Flaherty, nurse practitioner at the Student Health Center, has not noticed a dramatic increase in weight as students progress in their time at Lindenwood.

“Students nowadays seem to be more into health and fitness and nutrition,” she said. “When they’re here, they’re here for problem visits, but a lot of times do ask questions about health, nutrition, things like that.”

Lindenwood sophomore Jack Poniewaz believes weight gain is based on how people live their lives and take care of themselves, not their year in school.

“It could be true for some people [but] might not be true for others,” Poniewaz said. “Possibly genetics. There’s a lot of factors that could play into it: if you drink, what you eat, how much you exercise.”

For some people, like student Evangelia Vamvas, the Freshman 15 went the other way.

“The food was so horrible that I lost 13 pounds,” she said.

Nancy Tinker, director of dining services, said they are making healthy options available to students, but that it is ultimately the student’s decision.

“If you want to eat at Chick-fil-A every day, that’s your choice to do that,” Tinker said. “There’s a lot of good choices at Qdoba, we added strips and there’s grilled chicken at Chick-fil-A. Over at Grab and Go, we’ve added grapes and cheese back into the menu as well as hummus and other healthier options.”

Poniewaz believes weight gain more often occurs a little at a time rather than all at once during one’s freshman year in college.

“It wasn’t during freshman year,” he said. “I’ve gained some weight, but it was more from senior year of high school to now.”

Despite these studies, there is a reason the Freshman 15 theory will likely continue to persist, students said. Many can lead unhealthier lifestyles while being away from home for the first time and being occupied with school.

“Kids don’t really have time to go eat in the cafeteria because we’re always going and going, so people go and pick up something fast, and fast food’s not good for you,” said student Breonna Jackson.

The study may give people a reason to breathe easier now that rigorous research has been conducted that measured weight gain over the course of people’s lives.