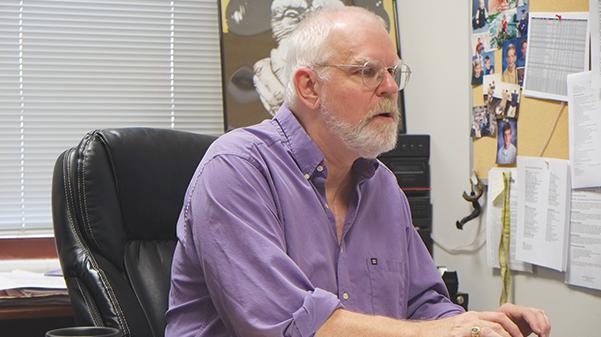 Rich Reighard prepares for a class while in his office in the KCLC radio station in the bottom floor of the Spellmann Center.
Photo by Nao Enomoto

Rich Reighard first walked through the doors at Lindenwood in 1987 with a fresh idea about communications that the university reluctantly agreed to.

“He actually taught the first internet course here,” said Mike Wall, associate dean for applied learning and operations who has worked with Reighard for 16 years. “He knew computers were going to be instrumental in communications. This is back in the late ’80s; he had to convince a very traditional institution to invest money into an internet program.”

This “against the grain” style became Reighard’s signature, especially among underclass students.

[perfectpullquote align=”right” cite=”Rich Reighard” link=”” color=”#f8de91″ class=”” size=”26″]”I know I’m not an unfair person. I just have a different interpretation of what fair is than certain students.”[/perfectpullquote]

“Generally freshmen and sophomores are scared because of his no-nonsense exterior,” Wall said.

“In his advanced audio class, I was kind of hesitant to ask questions,” Ziske said. “I didn’t have a clue what I was doing, but you find out pretty quickly that he’s one of the better step-by-step instructors here.”

To date, warnings about the tough nature of Reighard’s classes are passed from student to student.

“I wouldn’t say my reputation is justified,” Reighard said. “I know I’m not an unfair person. I just have a different interpretation of what fair is than certain students. I’m not really bothered by it. After 30 years you hear the same kind of complaints from the same kind of students, so none of it is really surprising anymore.”

Former student and now co-worker Brandon McKinney said that at face value, Reighard’s loud delivery, lack of dialogue in classes and strict deadlines intimidate some but are delivered with a purpose many students overlook.

[perfectpullquote align=”left” cite=”Mike Wall” link=”” color=”#f8de91″ class=”” size=”22″]”We won’t be able to replace him; we’ll only be able to find somebody with their own skillset and build from there.” [/perfectpullquote]

Compliments and references aren’t necessarily high on Reighard’s list. Even when former student and current Cardinals play-by-play announcer Dan McLaughlin came to Lindenwood last week, he talked about his days in his classes. Reighard met these comments with shrugs. What keeps him going is the students he knows have professional potential.

“When you see someone that you know gets it and you know you can give them a nudge in the right direction, it’s pretty nice,” Reighard said. “It’s always those good ones that keep you coming back.”

With many years of teaching under his belt, the end is inevitably near, although the timeline is yet to be laid out.

“I’m not going to be here another 30 years or anything like that,” said Reighard. “Whether I’m here for a couple years or another five or six, I plan on sticking around as long as I’m having fun.”

Co-workers and students both said that a replacement will come in with big shoes to fill.

“We won’t be able to replace him; we’ll only be able to find somebody with their own skillset and build from there,” Wall said. “Whoever comes in won’t replace Rich; they’ll be the next generation of Rich.”