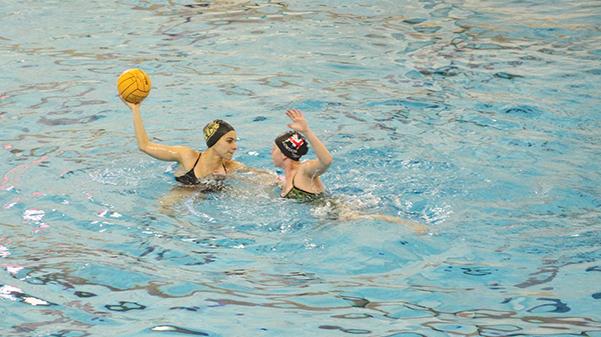 Laia Pons and Delaney Simmons square off during a practice match at the St. Peters Rec-Plex Thursday.
Photo by Madi Nolte

Lindenwood’s women’s water polo team has had a good start so far this season, and is hoping to improve throughout the season.

Opening the season, the team started on the road for a Conference Crossover on Feb. 11 and 12 at the Grand Valley State campus in Allendale, Michigan. The Lions started off with a 17-3 win on Friday night over the University of Cincinnati.

On Saturday, the Lions matched up against the University of Notre Dame and fell short 10-7. In the final game of the weekend, the Lions also lost to rival McKendree University, 16-9. Overall, the women’s water polo team went 1-2 with their first weekend of matches.

The Lions had a good start to the season, but head coach Dave Miller expects them to improve greatly through the season as they adjust to a new style of gameplay.

“This is the second season using our offensive and defensive tactical systems and the team is executing it fairly well,” said Miller. “We are not a very fast team, but the girls are smart and they play hard.”

The team showed signs of improvement entering the second week of the season.

On Feb. 18 and 19, the Lions traveled to the Michigan State campus in East Lansing, Michigan, for the Spartan Invite. There, the team went on to go 2-2.

The first matchup was against the University of Michigan where the Lions first lost 8-1 on Friday night.

After the tough loss, the Lions were on the prowl and were not going down without a fight; the team came back on Saturday with a 11-7 win over Grand Valley State University.

[perfectpullquote align=”left” cite=”Dave Miller” link=”” color=”#f8de91″ class=”” size=”26″]”The entire team is improving and getting stronger with each tournament. I believe they will be a contender to win the Midwest Conference title.”[/perfectpullquote]

These wins did not come easy for the Lions.

“The biggest challenge we are facing this season is the team player numbers,” said Miller. “We had 16 team members last season, but due to graduation, injuries and athletes not returning to school, we are down to nine players.”

However, Miller does not expect the lack of athletes to postpone success for the team.

“Although we did not have any new athletes this year, with our returning team and our 2017-2018 recruiting class, which is awesome, the future is looking good.”

So far this season, the Lady Lions are 3-4. The Lions will have two more away meets at Penn State and Monmouth, Illinois, before having their first home tournament at the Rec-Plex in St. Peters, Missouri, on March 25 and 26.

This tournament will be another Conference Crossover against Saint Louis University, Illinois State University, Grand Valley State and McKendree.

Coach Miller has faith that his team will be able to perform well against teams in the conference when it comes time for conference championships.

“We have a couple of girls who are great athletes but with very little water polo experience,” said Miller. “The entire team is improving and getting stronger with each tournament. I believe they will be a contender to win the Midwest Conference title.”