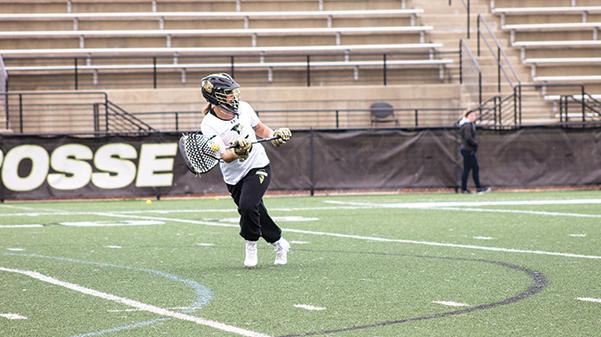 The Lindenwood women’s lacrosse team took on the No. 1 ranked Florida Southern Moccasins and walked off the field with a 14-11 victory and a feeling of revenge.

“You know it feels great. I’m really proud of the way the girls played today,” said head coach Jack Cribbin. “I thought we competed hard for 60 minutes and prepared hard for the game plan this week. [Florida Southern] is a team that’s very well coached, and they’re the national champions for a reason.”

Not only were they the national champions, but the Moccasins were the reason the Lindenwood Lions finished the last year’s season in third place, turning Sunday’s regular season game into something much more than a home opener.

“I think it’s a little bit sweeter,” said senior Erin Abbott. “It’s so nice to get that revenge back after losing to them twice last season, and we’re just thrilled.”

The Lions were in control nearly the whole game after Maria Johnson’s assist set up Rachel Benzing’s fifth goal of the year only 1:50 into the first half and the Lions never trailing. Benzing, who led the team in minutes played, attributed her resilience to the energized home crowd.

“This is an intimidating stadium,” Benzing said. “We had an intimidating crowd, and I think our vibes just outnumbered them. They just could not match us with our excitement.”

Despite a consistent 3-5 point lead for the duration of the game and the eight-point day from Benzing and a four-point day from Morgan Judd, the Lions were never fully comfortable with their lead.

“The whole game we were keeping our guard up,” Cribbin said. “They’re the kind of team that if you give them an inch, they’re going to take it and take advantage of it. We didn’t really stop and take a breath until that final whistle blows because we know how talented our opponent is, so the whole game we’re trying to do our best and grow our lead.”

Now 3-0 on the season, the Lions know that although they have just handed the defending national champions their second loss of the early season, odds are they will see Florida Southern again in the postseason, where both teams will be ready.

“I bet they’ll hold on to this and come out a little bit more fired up,” Abbott said. “Especially as the season progresses, teams are going to get better and stronger, so the matchup should be just as good and strong as this one.”

The Lions came into the game ranked fifth and now stand 3-0 on the season with their next game at home on March 7 against the 2-0 Regis University Rangers.