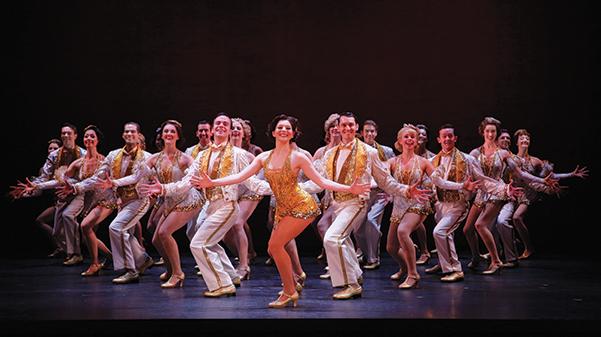 According to the show’s website, the original Broadway production of “42nd Street” opened on August 25, 1980, and played for 3,486 performances on Broadway at the Winter Garden, Majestic and St. James Theatre. It is the 14th-longest-running show in Broadway history.
Photo from Peter Colombatto

Lindenwood gets a piece of Broadway when the musical comedy classic "42nd Street" takes over Lindenwood Theater on Sunday.

According to the show’s website, "42nd Street" is based on the novel by Bradford Ropes and Busby Berkeley’s 1933 movie of the same name. It tells a story of a young dancer, Peggy Sawyer, who goes to New York from her small town in Pennsylvania to audition for a Broadway musical called "Pretty Lady." The show’s lead, Dorothy Brock, injures herself, and Sawyer steps in to take over and gets her break on the Broadway stage and faces stardom.

According to playbill.com, the 2016-2017 tour cast includes Clara Cox as Sawyer and Matthew Taylor as the director of "Pretty Lady," Julian Marsh.

Taylor told the Macon, Georgia, newspaper The Telegraph in February that he sees this show as a much-needed "breath of fresh air."

[perfectpullquote align="right" cite="Matthew Taylor" link="" color="#f8de91" class="" size="30"]"It’s classic and stylish and smooth and simple, but complex and beautiful at the same time."[/perfectpullquote]

"This is a great time to come and see this show. It is a reminder that even in the darkness, there is hope and excitement," he said. "There is still hope amidst the uncertainty."

Peter Colombatto, the director of marketing and communications in the School of Arts, Media and Communications at Lindenwood, said they are very excited to bring the show to Lindenwood.

"These events present a great opportunity for our community to see a wonderful piece of theater, while also providing a hands-on experience for our theater students who assist with the production," Colombatto said. "It’s a unique experience, and we are excited to be a part of it."

According to the show’s website, director and co-author Mark Bramble and choreographer Randy Skinner are the team behind the production.

Taylor told The Telegraph that the pair "walked out of a vintage theater in the 1970s and knew they had to write it. A few years later, it opened on Broadway. It has continued to great success."

Bramble and Skinner’s 2001 "42nd Street" won two Tony Awards for Best Musical Revival, Best Leading Actress and the Drama Desk Award for Outstanding Revival. Bramble also has staged productions of the show all over the world, including London, Sydney and Tokyo get a locksmith near me.

Taylor said the biggest thing that lures people to see "42nd Street" is the musical numbers.

"42nd Street" performs at 7 p.m. on Sunday, March 12, in the Lindenwood Theater at the J. Scheidegger Center. For ticket information, contact the Lindenwood Box Office at 636-949-4433.