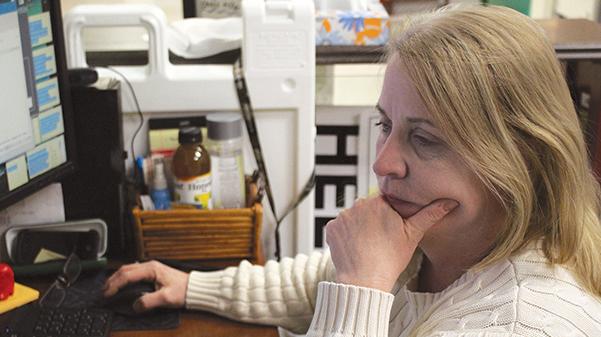 Jan Gerst works at her computer in the "aquarium," a name she said the staff came up with to describe what it's like to sit behind glass walls at the IT help desk.
Photo by Kyle Rainey

Gerst is a graduate student and is currently enrolled in Lindenwood’s graduate program for computer sciences.

She said she has been practicing martial arts for 25 years, and she uses those teachings to influence her community.

Gerst said growing up on St. Louis’ Sunset Boulevard really opened her eyes to the dangers of the world. She knew then she had to find a way to protect herself.

Because she grew up watching Bruce Lee and Jackie Chan movies, she said she knew martial arts was something she wanted to pursue. Working hard, Gerst rose through the ranks and soon became a teacher who owned her own dojo.

Gerst has partnered with police departments teaching classes for officers in weapon disarmament as well as teaching anti-bullying and rape awareness courses to adults and children alike. Her favorite classes to teach were those that involved women who were victims of domestic violence.

“When I saw their self-esteem completely depleted, it was my goal to make them whole again,” she said. “I wanted to help them gain their confidence back.”

As a teacher, Gerst said martial arts helped her step back and evaluate situations before she reacted. Martial arts gave Gerst and many of her students the confidence to no longer live in fear, she said.

“It has brought me peace and confidence in myself,” she said, adding that it is important for people to feel safe within themselves.