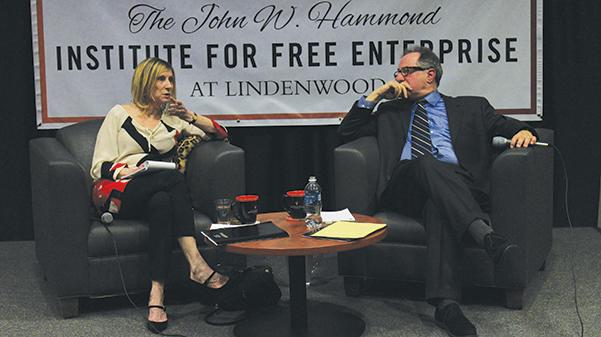 Speakers Christina Hoff Sommers and Michael Kimmel respond to an audience question at 'Boys 2 Men: Too Much or Too Little Masculinity?' on March 1 in the AB Leadership Room.
Photo by Lindsey Fiala

Last Wednesday I attended an event in the AB Leadership room in Spellmann called “Boys 2 Men: Too Much or Too Little Masculinity?” and I think it was a wonderful way to promote free speech.

The event was put on by the Hammond Institute and the Gender Studies program and featured speakers Michael Kimmel and Christina Hoff Sommers.

When Rachel Douchant, director of the Liberty and Ethics Center within the Hammond Institute, kicked off the event, she explained that instead of having a discussion about free speech, they just wanted to host some free speech. I think that this was a phenomenal way to go about this.

The best way to really promote free speech, especially when people on both political extremes are so often putting it at risk, is to display it.

Sommers is genuine in her beliefs and is not actively being provocative. Regardless, she has been denied platforms to express her views. Giving her a platform encourages people to think about their freedom of speech in a new way. Even better, bring in someone who is just as qualified to express a different view on the same topic.

Before the event, I was already very familiar with Kimmel due to the fact that I am a gender studies minor, and his texts are the basis for the introduction class. Sommers I was not very familiar with but was aware that she had been disinvited from several universities and held some controversial views.

The talk did not become much of a debate, except for a discussion or two during the Q&A.

To me, this is rather important because it shows that there does not have to be a right and a wrong, a winner and a loser. It shows that two people with opposing views can present their ideas next to each other and be respectful.

Too often we forget that not everybody has to agree with us. One of the things that makes this country great is that there are so many different perspectives, and everybody is free to express viewpoints. This melting pot of ideas is how we advance as a society.

We may not always like it — and believe me, I did not agree with much of what Sommers said — but it is a necessity.