Hiring on spectrum is beneficial 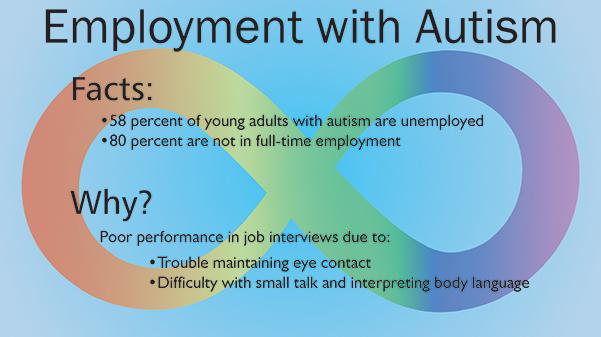 People on the autism spectrum face many challenges, but few are as arduous and time-consuming as finding jobs.

I am not shy about having Asperger’s Syndrome. I have written an article about what it is like to live with it. I even own a shirt that says “Dude, I’m an Aspie.” But the vast majority of people on the spectrum do not reveal this to potential employers and for good reason: There is still a stigma surrounding autism, specifically Asperger’s, in the workplace. This needs to go away, because many of us possess unique skills that make us extremely valuable to companies.

A 2015 study by Drexel University says that 58 percent of young adults with autism are unemployed, and 80 percent are not in full-time employment. The main reason for this is poor performance in job interviews. We often have a lot of trouble maintaining eye contact, and small talk and body-language interpretation are not our strong points — all integral to a successful job interview.

But if people are able to look past our weaknesses, we can show some amazing strengths. One attribute that many of us possess is strong attention to detail.

I have been working as a copy editor on newspapers since 2011 and am able to find many grammatical errors that most others miss.

Another trait many of us have is the ability to do repetitive tasks over long periods of time. I can edit for hours without growing bored; indeed, a task most people find laborious, I find extremely fun and relaxing.

Additionally, many of us lack interest in socializing. While many workers may slack off and talk to coworkers instead of getting their jobs done, people on the spectrum are often focused on the work they have been assigned. Many of us are much more interested in our work than chatting with others.

The old adage “Honesty is the best policy” is held in high regard by most people on the spectrum. Most employers emphasize honesty as a trait that they seek, and those on the spectrum do not dance around the truth. We are often honest to the point of extreme bluntness.

Most of us do require some sort of accommodation to work proficiently, however. The majority of people with Asperger’s have sensory issues. I have hypersensitive ears and cannot work in loud environments, so I need it to be relatively quiet.

These required accommodations can make some jobs difficult for people with Asperger’s. Jobs that provide a lot of sensory stimuli or require large amounts of socializing can be extremely overwhelming, and most of us will not perform nearly as well as a neurotypical (non-autistic) person in those jobs.

In some ways, companies are actually going backward when it comes to hiring those with Asperger’s. Many companies now use “emotional intelligence” tests to assess prospective employees’ abilities to understand their emotions and those of others. People on the spectrum often have low scores on these tests, causing many companies to believe we are less capable than we actually are, which often leads to companies sacrificing job skills for people skills.

Also, higher scores are not always a good thing. People who scored lower on these tests proved to be more adept at mechanical, scientific and accounting jobs than those who showed more emotional intelligence.

There are a few companies that have realized that hiring people on the spectrum can be highly beneficial, such as Microsoft and other technological companies.

While many people with Asperger’s fit the IT mold perfectly because of the attention to detail required and limited interaction with others, companies outside of the tech industry also need to realize that many people on the spectrum contain limitless potential.

Although we need certain accommodations to be made for us to perform to our full potential, the benefits a company can receive by employing a person on the spectrum often far outweigh any drawbacks.

Although some companies are becoming aware of this, people on the spectrum are still a massively underutilized resource.