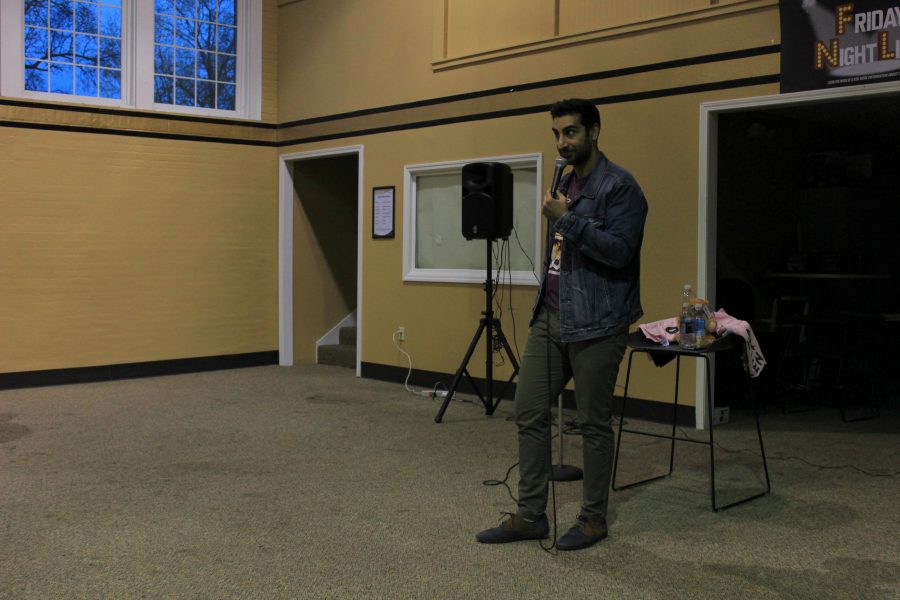 “We had more people than expected show up,” Campus Activities Board Event Coordinator Kelsey Gross said. “It was a lot of fun and everyone seemed to have a good time.”

Audience members were able to take a seat at tables around the stage and enjoy appetizers.

“We arranged the tables like they would be in a comedy club,” said CAB Event Coordinator Tara LeClere. “I think it worked out well.”

Saleem was very interactive with the crowd and was able to really connect with his audience.

“I want to make sure everyone is comfortable,” Saleem said. “That is why I even make fun of myself.”

He made sure to involve the audience as much as possible by asking them their names and trying to guess where they lived.

Saleem described his sense of humor as smart and goofy.

“My jokes are based on personal experiences,” Saleem said. “I tell my jokes through stories.”

Saleem also tried to guess which couple in the audience had been together the longest.

“I’m sorry, I didn’t mean for this to turn into a dating show,” Saleem said.

Saleem said that he got his sense of humor from his family along with one of his best friends, Gaurav.

“I have always been a comedy nerd,” said Saleem. “I never knew that comedy was something you could actually do until I tried it out at an open mic in New York.”

One of the members of the audience, Cecilia Young, thought Gibran was very funny.

“Gibran knew how to play for the audience,” said Young. “He was able to plan his jokes accordingly to the crowd.”

After the show, CAB Event Coordinator Kayla Drake announced the winners of Beardfest. Coming in third place was Trey Green, second place Colin Albert and the winner of the competition was Greg Judge.

Graduate Advisor for CAB Ethan Miller thought the night was a big success.

“I thought it was a great show,” Miller said. “I was happy with the turnout and it was a good end to a busy week.”