All shook up: Students, faculty need plan to prepare for an earthquake 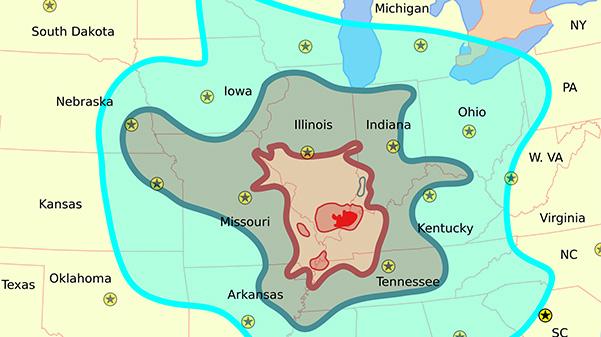 April is Earthquake Preparedness Month, and although a major quake hasn’t hit the area since the 1800s, students and faculty should have a plan in case of a quake.

“In the case of these natural disasters, we all get lost, scared and confused,” said Ana Londono, assistant professor of earth sciences at Lindenwood. “So having [a plan] and having it prepared and repeated constantly is always good.”

According to the United States Geological Survey, the central United States is called “Earthquake Country” due to seismic activity in areas such as the New Madrid seismic zone located in the town of New Madrid, Missouri.

The exact location of the New Madrid fault is hard to pinpoint due to the fact that the area is a zone of several active faults, according to a newsletter sent out by the USGS.

Londono, who spent time in her master’s degree studying natural disasters and their effects, said that everyone, including students, should always have a natural disaster plan put together, such as identifying whom your first and second emergency contacts would be in the event of an earthquake.

“Have important phone numbers handy,” she said. “Of course, 911 will get you far, but have a number like campus safety to ask for help.”

She also encouraged students to write down phone numbers on a piece of paper instead of relying on a phone.

“We all suffer from battery loss on our phone devices, and we have no idea about phone numbers for anybody,” she said. “Have them written down somewhere so if your phone is dead, you can borrow someone else’s phone so you can call someone.”

As a part of each student’s earthquake safety plan, Londono said that students should know the evacuation routes for campus buildings and to never use the stairs or elevator during an earthquake.

“At least get to places where there aren’t tall items that can fall on you,” she said. “If the vibrations are too strong, duck and cover. Go to a desk, not necessarily under a desk. Sometimes there are heavy things in vicinity that can actually squash the desk with you underneath it.”

Londono also said that students should put together survival kits with flashlights, any medicine needed, non-perishable food, water and emergency radios if the power were to be shut off.

Lastly, Londono said that it is important for students to create plans with family members on how to let them know that they are OK.

“If you have access to internet, you can drop them a message through Facebook or send them an email,” she said. “Or you will contact a specific person and to let them know you’re OK. But have a way to let people know.”

The Central United States Earthquake Consortium website also warns individuals to keep up immunizations and to turn off the gas line for homes, such as off-campus housing.

Though most of the earthquakes were not felt in the St. Charles area, the potential for a large earthquake is still available.

According to the St. Louis County website, there is a 25 to 40 percent chance of a magnitude 6.0 or greater earthquake occurring within a 50-year period.

Londono said that whether students are studying at Lindenwood or traveling abroad, they always need to keep the thought of natural disasters in mind.