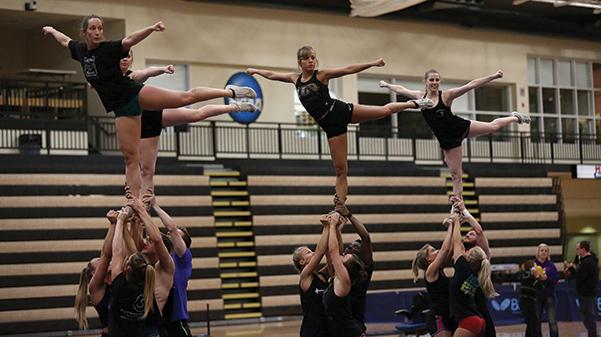 The Lindenwood cheer team has its sights set on bringing hardware home for the third year in a row as it travels to the national championships this weekend.

Last year, the small coed cheer squad took home the top prize at the championships, and two years ago, it was the large coed squad that brought home the trophy.

As they put in final preparations for this year’s championships, those two squads, as well as the team’s all-girl squad, believe they have what it takes to continue Lindenwood’s winning tradition.

She said that the large coed team had a bit of a rough start to the year, but that they have made a lot of progress in the past month in the buildup toward nationals.

“They have really proven why they are on the team and how they are doing so well,” Nichols said.

While the large coed squad is trying to recapture the magic that led it to the national championship two years ago, the team’s small coed team is feeling the pressure of winning back-to-back titles.

Marsoun added that although a lot of work is left, she feels that her squad has done everything it can to live up to those expectations.

“We are definitely prepared for this,” Marsoun said.

Nichols agreed with Marsoun’s assessment, saying that the small coed squad seemed like it was ready to defend its title.

“They have worked really well together as a team all year,” Nichols said. “For the returning kids that were on the mat last year, they know what it takes. And I think they have been good leaders to help the new kids aim to be national champions.”

While both of the coed squads head to this year’s national championships with previous expectations to live up to, the team’s all-girl squad is looking to make its mark on the national stage for the first time.

“The all-girl squad had a poor showing last year, so they’re hungry because they have never won,” Nichols said. “I think they feel a little extra pressure being the team that hasn’t won.”

Despite that pressure, all-girl captain Haley Booker said her squad is just preparing to reach its potential at nationals, and if the results end in a championship, then it’s an added bonus.

“We’d like to be deduction-free,” Booker said. “Our goal is to go in there, hit a deduction-free routine. Once you do that, you’re pretty much doing everything to your full capacity, and that’s all we can ask for.”

The national competition begins Wednesday, April 5, in Daytona Beach, Florida, and runs through the weekend.

“Hopefully the competition ends in a ring,” Booker said. “That’s the dream.”