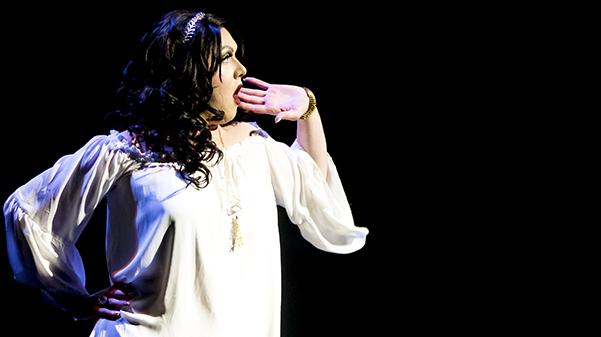 Ethan Miller performs as Mercury Jones at the drag show in the Emerson Black Box Theater last fall. This spring, the show will take stage at the Lindenwood Theater for the first time.
Photo by Kelby Lorenz

The fifth semiannual Gay/Straight Alliance drag show has made it to the main stage for the first time in the J. Scheidegger Center.

Performer Ethan Miller, the founder of the drag show at Lindenwood, said he did not expect the event to become this big.

“I never imagined we would have [a drag show] at all,” Miller said. “And here we are, two years later, on our fifth one.”

The event recently celebrated its two-year anniversary on March 26.

The drag show has slowly become one of the Gay/Straight Alliance’s biggest events it puts on, the event’s organizer, Kelsey Smith, said.

“It is an event that all of us can be a part of and be able to get out and have fun,” Smith said. “It is also a way for us to give back to the community, because all of our tips that we get from the show go to Pride St. Charles.”

School of Humanities associate professor Heather Brown-Hudson will be hosting the show for her third time.

“It is a lighthearted event that has a lot of planning that goes into it,” Brown-Hudson said. “I am there to support and to entertain.”

For every show, Brown-Hudson donates anywhere between $100 and $200. She brings the money in $1 bills to hand out to the audience so they can tip the performers in hope that all of the money will go right back to Pride St. Charles, which is an organization advocating for the LGBT community.

“We have a number from ‘Chicago,’ two from ‘Hairspray’ and a couple numbers from ‘Cabaret,’” Smith said.

Other numbers in the show will come from “Tangled,” “The Lizzie McGuire Movie” and a couple of Disney movies.

Miller will be performing a few solos, one which will be pulling music from the 1988 film “Who Framed Roger Rabbit.”

“I am going to be doing a number as Jessica Rabbit,” Miller said. “It is fun to go out and be somebody else for a couple hours.”

Cody Floyd, also known as Duchess, will also be back to perform since the show made it to the main stage, Smith said.

“It is going to be a lot of fun seeing different ways people are taking [their performances],” Miller said. “Some of them are taking it really old school, and some people are going very Broadway.”

Get Reel is a free event and will be held from 7:30 to 10 p.m. on April 5 in the Lindenwood Theater in the J. Scheidegger Center. People also can give tips that will be donated to the Pride St. Charles, and free T-shirts will be given to the first 150 attendees.