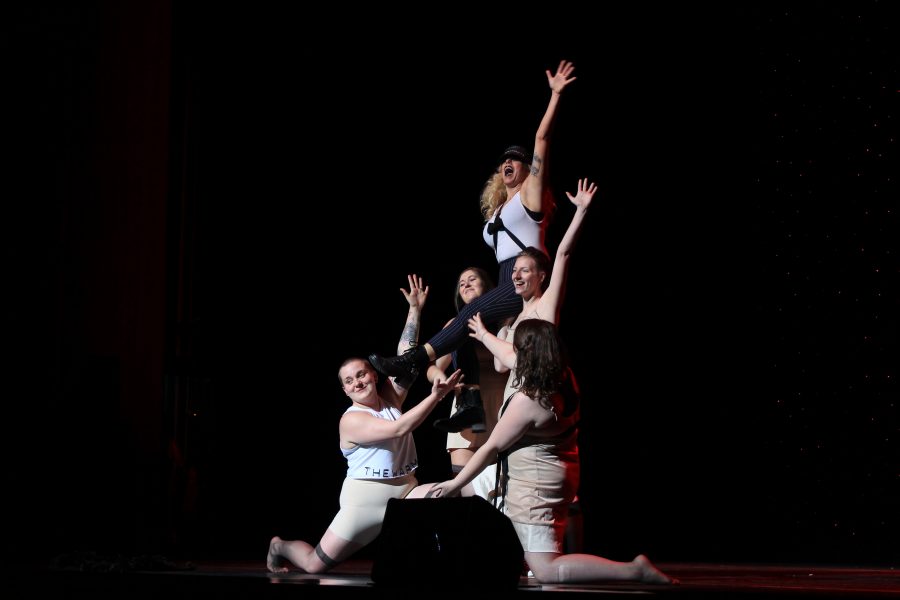 Performers pose for the audience at the end of their number. Photo by Lindsey Fiala

The show featured 24 routines, including solos and group numbers by members of GSA.

“Everyone interpreted the theme differently,” Graduate Adviser of Campus Activities Board and performer Ethan Miller said. “We had a wide range of movies and musicals.”

Throughout the show, members of the audience were encouraged to walk up to the stage to tip performers for their performances.

In between every performance, hosts Brown-Hudson and Jen Spellazza took the stage to give out thanks to performers, supporters and audience members for attending.

Spellazza is a graduate/evening admissions counselor, a Lindenwood alumna, one of GSA’s advisers and the second vice president for Pride St. Charles.

“This is my third year hosting the drag show,” Brown-Hudson said. “I think it is wonderful, and I am very proud of everyone who performed.”

Brown-Hudson also had trivia about musicals for audience members to answer between performances. Each right answer was awarded a prize, either a drag queen or king prize which included a bra, deodorant, nail polish and body spray.

This was the first drag show to take place in the Lindenwood Theater in the J. Scheidegger Center, which performers made good use of according to Brown-Hudson.

Miller was the one to bring the drag show to Lindenwood. He has performed in every show.

“It has always been my dream to have [the drag show] on the big stage,” Miller said. “It was just amazing.”

The show took the big stage to accommodate the 300 people who attended.

Performers had to spend almost all of their free time rehearsing together and building props in order to put on this show. Some nights rehearsals went until midnight or later.

“I was personally happy with ‘Cell Block Tango’ because we worked really hard on that one,” Miller said. “We built a lot of props and it took a lot of rehearsal to get it down.”

Before the show began, the first 150 audience members to arrive received a free T-shirt with the show’s name and logo on the front.

The audience was filled with cheers and applause throughout the night as the participants performed and even walked off of the stage to strut through the crowd.

The night concluded with a group number, “Can’t Stop the Beat,” by all performers.

“I just think [the drag show] is something different,” Miller said. “We try to top the last semester by making it bigger and better, and I think we did that tonight.”