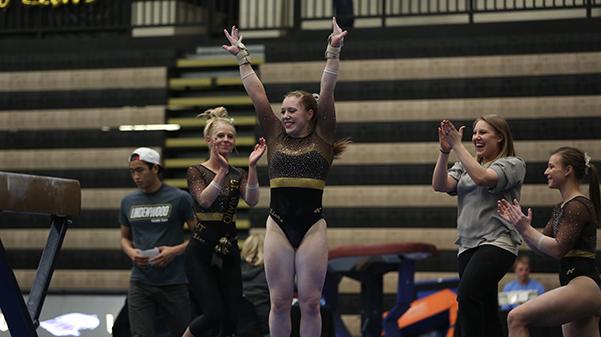 Katey Oswalt and her teammates celebrate at the conclusion of beam her routineduring a a meet at the Hyland Arena.
Photo by Carly Fristoe

Almost exactly one year ago, the Lindenwood gymnastics team stood on the floor of its own Hyland Arena celebrating its second consecutive national championship. This weekend in Seattle, the players will try to make it three in a row.

“We are as prepared as we can be,” head coach Jen Kesler said. “Now it’s just time to execute and focus on our job. We’re just going to worry about what we are doing and not what anyone else is doing.”

This year, the USA Gymnastics Collegiate National Championships are being hosted by Seattle Pacific University, who earned an automatic bid to the championships despite not earning a high enough qualification score. In addition to Seattle Pacific and Lindenwood, this year’s field includes Texas Woman’s University, Yale, Brown, Bridgeport, Cornell, Air Force and West Chester.

[perfectpullquote align=”left” cite=”Jen Kesler” link=”” color=”#f8de91″ class=”” size=”30″]“We are just going to need to be able to do what we are capable of doing.”[/perfectpullquote]

Of all of those teams, the biggest threat to Lindenwood’s three-peat will likely come from Bridgeport, which has become Lindenwood’s top rival over the past three years. In each of the past two seasons, Lindenwood has finished as the champion, with Bridgeport finishing right behind them. In 2016, the Lions edged Bridgeport by just 0.075 points to win the title.

Much like last year, Bridgeport is entering the championships as the top-seeded team with Lindenwood coming in ranked second. Despite that rivalry, Kesler believes that the Lions will have to keep their eyes open to the entire competition, believing that the entire field has improved coming into this year’s championships.

“It’s going to be a very challenging event because teams are very good this year,” Kesler said. “We are just going to need to be able to do what we are capable of doing.”

One of Lindenwood’s top assets heading into this weekend’s championships is junior Kierstin Sokolowski, who competed in the NCAA regionals last weekend. In both the vault and balance beam events, she finished with scores of 9.800. Due to a season-ending injury last year, she was unable to compete in the championships.

“I am very excited,” Sokolowski said. “It was kind of rough sitting out last year, but obviously I was proud of them for bringing home the championship again.”

She added that going through the experience of missing out a year ago makes her want to compete at the highest level even more this weekend.

Another key contributor to this year’s championships is sophomore Katey Oswalt, who ranks in the top 10 nationally in both the floor exercise and the vault. She said that last year’s experience in the event has prepared her even more for this year.

“I went into last year with the mindset that this is just another meet, and was really surprised by the enthusiasm by everybody that was there,” Oswalt said. “So I’m definitely prepared and know what to expect. We are definitely more prepared as a team.”

This year’s championships will spring into action Friday with the team semifinals. Lindenwood’s session will get underway at 9 p.m. central.

The top two teams from each of Friday’s sessions will compete in Saturday’s team finals, where the national champions will be crowned. The event will conclude Sunday with the individual finals, where titles will be handed out for each of the four events and to an all-around champion.