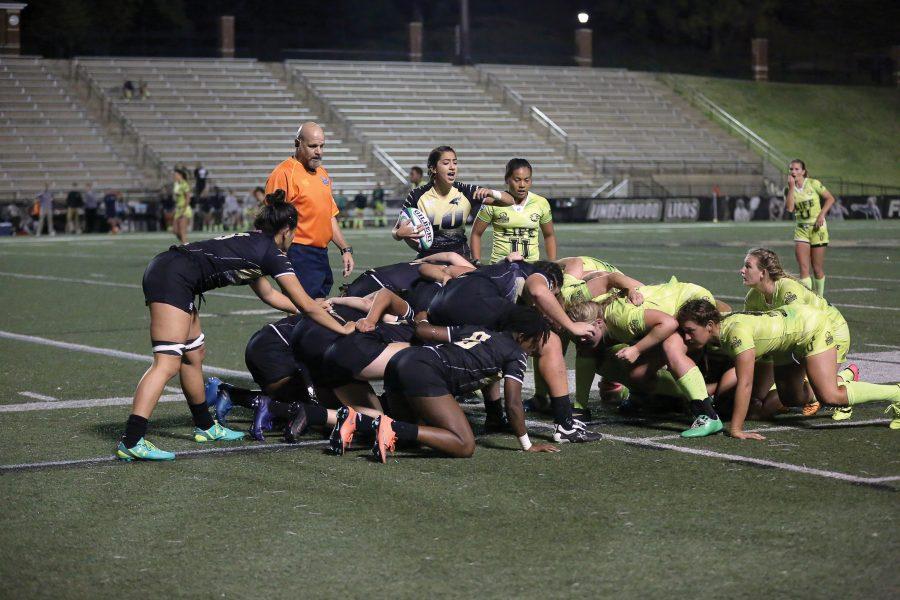 AnnaKaren Pedraza holds the ball as she coordinates with her teammates during a game against Life University on Nov. 22, 2016 in Hunter Stadium. The Lions beat their rival in two matches that day 24-14 and 46-5.
Photo by Carly Fristoe

Women’s rugby player Annakaren Pedraza achieved one of her biggest goals when she made her debut for the USA women’s national team against Canada.

The La Quinta, California, native was included as a substitute for the USA and made her first international appearance, or “cap,” as it is known in the rugby world.

The game was the first of two in the Can-Am series held in Chula Vista, California.

Despite being the youngest member on the team at the age of 20, Pedraza held her own on the pitch, said USA rugby head coach Peter Steinberg.

“She came off the bench in the first match and did well,” Steinberg said. “She has a great pass, and despite being so young, she showed good leadership and communication.”

Coming out of high school, Pedraza wasn’t an All-American like many of her teammates at Lindenwood were.

In fact, she didn’t make the U20 national team either. This would be the equivalent of a baseball player skipping the minor leagues and going straight to the major leagues.

[perfectpullquote align=”left” cite=”Billy Nicholas” link=”” color=”#f8de91″ class=”” size=”26″]”We talk a lot about the desire to be successful at the next level and the will to work to get there, and Annakaren has both of those.”[/perfectpullquote]

However, that didn’t stop Pedraza from working at her goal.

According to Lindenwood women’s rugby head coach Billy Nicholas, Pedraza always puts in extra skill sessions and strength-and-conditioning work to propel her to the next level.

Nicholas said Pedraza has the right attitude and the desire to succeed.

“We talk a lot about the desire to be successful at the next level and the will to work to get there, and Annakaren has both of those,” Nicholas said. “She’ll continue to apply herself and take advantages of the opportunities ahead of her.”

Pedraza said her continued dedication is due to her desire to succeed in the sport she loves and achieve the goals she has set for herself.

“I remember about two years ago, I told my mom I wanted at least one cap, and I’d be happy,” Pedraza said.

It turns out one cap wasn’t enough for Pedraza. She went on to start for the team in the second game of the series against Canada on April 1. Unfortunately the USA again lost to the Canadians. This time it was 37-10.

The biggest opportunity ahead of Pedraza is the Women’s Rugby World Cup in Ireland, which runs August 9 to August 26.

According to Steinberg, Pedraza “has a great shot at making the World Cup team,” something Pedraza has her sights set on as well.

“I want to buckle down with school and put in academic work,” Pedraza said. “Train for upcoming matches with Lindenwood and focus on finishing up the season. Then go back to train with Team USA to make the World Cup squad.”

USA has been drawn in Pool B of the tournament and will have to win at least two out of three games against Italy, Spain and England if it wants to progress through to the quarterfinals. The team will play all of its games in Dublin.

“To see Annakaren evolve over the last two years into a position she didn’t really play much until she got here has been amazing,” Nicholas said. “She is a sponge and will continue to get better and better.”