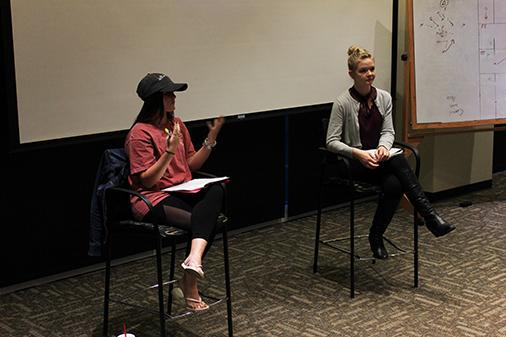 Haley Holman and Ilsa Dulle from Lindenwood's Campus Organization Against Sexual Assault lead the group discussion following the film 'Escalation' during the 'One Love Workshop' on April 11.

The Campus Organization Against Sexual Assault hosted a “One Love Workshop” with the goal to stop relationship abuse.

The workshop was held on Tuesday night in the Student Athletic Center’s Tiered Meeting room and was the fourth one organized by COASA.

According to The One Love Foundation’s website, One Love is an organization  The foundation was created by Yeardly Love’s parents after she was beaten to death by her ex-boyfriend.

The film, “Escalation”, which portrayed a story similar to Yeardly’s, was shown to the athletes followed by a group discussion.

“It is important [to hold this workshop] because you never know when something like this is going to happen and it does happen,” Dulle said. “You don’t know if someone is really needing help until you know what little signs to look for.”

“Everyone had very thoughtful eyes the whole time,” Holman said. “There wasn’t much talking but everyone seemed to be deep in thought.”

The Campus Organization Against Sexual Assault believes it is important for everyone on campus to be informed about relationship abuse and have resources available to handle these difficult situations.

“I have personal experience with [relationship abuse] so that is what really drew me into this organization,” Dulle said. “I’m used to talking about it so if we aren’t going to talk about it, then who is?”

Holman joined for a similar reason.

“Just knowing how many people are affected by relationship abuse, sexual assault and domestic violence shows that we need to be educated,” Holman said. “I started volunteering for Safe Connections my freshman year of high school and it taught me things I had never known before.”

The Campus Organization Against Sexual Assault urges students to contact them if they are in need of any help, advice or just someone to talk to. Students can also email the organization’s advisor, Tina Babel at [email protected] if they need any assistance.