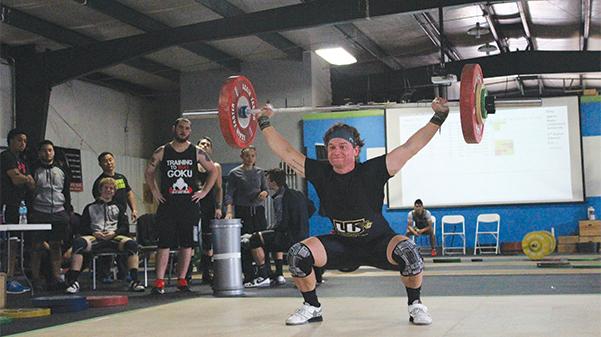 Lindenwood weightlifter Blake Smith channels all of his strength to catch a snatch on Nov. 2, 2016 at the Uncharted Open. This was the team’s first meet following the 2016 National University Championships.
Photo by Lindsey Fiala

The Lions have brought multiple national championships back to St. Charles this spring, and now, the Lindenwood weightlifting team can be added to that list.

The Lions ran away with the national championship, shutting down runner-up Northern Michigan and keeping third-place Eastern Tennessee almost completely off the board.

“We had an idea once we had three national champions on Day One and two lifters place top five,” said coach Austin Rodriguez. “But like any coach, we never want to think we’re winning, so then we stay humble and compete just like we were behind in points.”

Bringing home the national championship came with a rather large tweak to the roster and setup that differed from last year’s strategy.

“Last year we had our best team as the coed division and more of our JV squad on the men’s and women’s division,” Rodriguez said. “This year we put our best teams on coed, male and female divisions, so we did have an idea that we were going to have a much better chance of winning compared to last year.”

The main point stressed to the team was that although this is predominantly a sport hinged on personal success, the Lindenwood Lions were only as good as the team’s collaborative efforts.

“We went in it making sure all our athletes knew to compete for the team first, then individually.” Rodriguez said.

In contrast to many sports Lindenwood offers, Olympic weightlifting is a sport with point systems that take days to calculate, essentially softening the victorious blow a national champion may feel. Thankfully, the meet wasn’t very close from the beginning.

“The win was very anticlimactic,” Rodriguez said. “We all had a strong inclination that we won since we did win six weight classes out of the competition and had everyone else place top seven.”

As for next season, the weightlifting team is taking no breaks and has plans to dominate again next season.

“Training for next season starts this week,” Rodriguez said. “Our lifters from nationals took a week off, and now they should be ready to get back into it. They will start with offseason training, so they will be doing a lot more volume instead of intensity.”