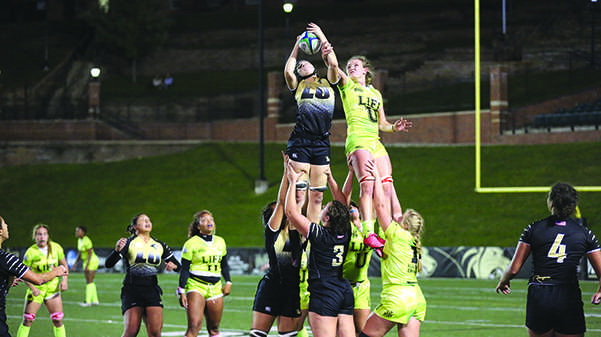 Lindenwood women’s rugby team lines out against Life University on Nov. 22, 2016, in Hunter Stadium. The game ended in a historic first-time win for the Lions against the Running Eagles.
Photo by Carly Fristoe

The Lindenwood women’s rugby team qualified for the 2017 College Sevens National Championships after it cruised to victory earlier this month at the Life University Invitational Sevens tournament.

“It felt great to know we are capable of being a team who could work together and have such an amazing end result,” junior Annakaren Pedraza said.

The Lions won their pool in dominant fashion. They defeated Life B 54-0, Middle Tennessee 58-0 and Clemson 67-0. The Lions’ dominance continued through the quarterfinal as they beat Life B 35-0 and dispatched the University of Virginia 20-0.

The Lions conceded their first points of the tournament in their thrilling 26-14 victory over Life A in the final. To start the game, Life jumped out to a lead after a long run. The Lions then responded with tries through Spanish national team player Teresa Bueso and Team USA player Annakaren Pedraza to end the half with a 14-5 lead.

Mackenzie Hawkins scored to start the second half and Pedraza got her second, and the Lions ended the game as 26-14 victors.

“I thought this weekend was very productive for our team,” Hawkins told lindenwoodlionslss.com. “It showcased the raw talent of many of our new players and what each of them can bring,”

This year’s College Sevens National Championships will be held May 19-21 in Glendale, Colorado. The tournament is round-robin style with teams being split into pools. The two top teams from each pool advance to the finals, where it is single-elimination.

Head coach Billy Nicholas was very happy with the results and the way the program is evolving this semester.

“Our whole program pushes one another to be better, and I think that’s something that sets us apart,” Nicholas said. “No doubt, we are just cracking the potential of this team.”