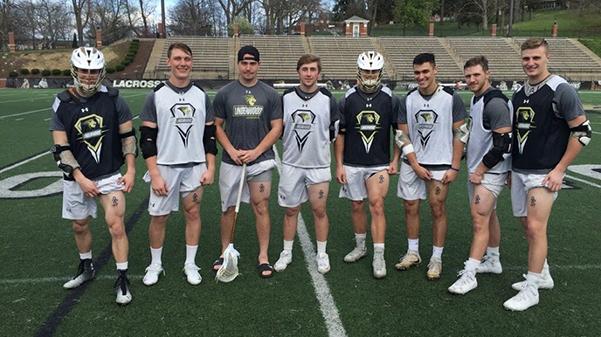 Members of the Lindenwood lacrosse team show their tattoos in honor of Isaiah Kozak who took his own life in March 2017.
Photo by Madi Nolte

Close friends and teammates of deceased Lindenwood men’s lacrosse player Isaiah Kozak have decided to pay permanent tribute by getting matching tattoos in his honor.

Junior Max Troha and the rest of the team had thrown the idea around of getting matching tattoos for a while, and when Kozak died, Troha had realized the tattoo they had all talked about now had a chance to mean so much more than a bonding mark.

“I drew it up, and we took it to a tattoo shop, and they kind of cleaned the whole thing up,” Troha said. “It’s the color of the suicide awareness ribbon as well as the ribbon and his number underneath it.”

Troha’s artistic reputation from the other players made it easy for others to buy in and trust his design.

“Well, Max is really creative, so I didn’t really think much about it,” said junior Jake Moran. “Then when he showed it to me I was like, ‘Damn, OK!’ When Max made a sign-up sheet, 16 people from the team signed up.”

Of the 16 people who signed up, eight ended up with the ink Troha designed. In addition, another member of the team also got a unique design in Kozak’s honor.

“Some people just had other issues with getting it,” Moran said. “It’s not that they didn’t want to get it; some would deal with it differently, looking down and seeing that on their leg. Some guys also don’t have tattoos, so it’s different, whereas me and Max already have them.”

The urge to look at any freshly inked tattoo has affected the eight on the team who got them.

“It’s funny because since it’s on our thigh, we can’t see it with clothes on, so all the guys in the locker room are sitting there with our shorts rolled up looking at it,” Troha said. “Same thing when I’m just sitting around at home. It has more meaning, so I’m constantly looking at it.”

Although Kozak’s death was tragic, the team wants to and will remember him for the good and the spontaneous, fun-loving teammate, person and friend he was.

“It’s almost a constant reminder of how he would have liked to have lived life,” Moran said. “We don’t want to remember him for anything other than how he really was.”

Any students struggling with mental- health issues are strongly encouraged to talk to someone. Joe Cusumano, director of the student counseling and resource center, may be reached at his office on the third floor of Evans Commons or by calling him at  636-949-4528.