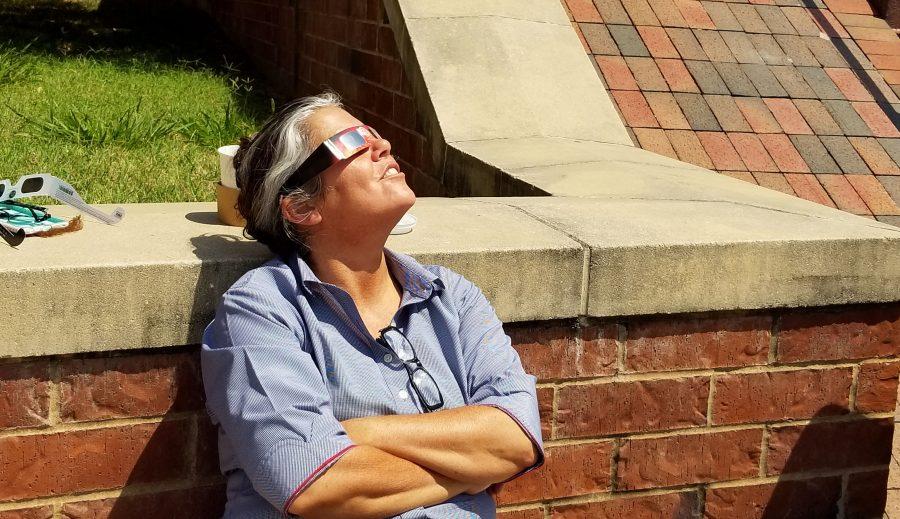 Angie Siebert, general manager at the Lindenwood campus Chick-fil-A, looks up at the partial solar eclipse that occurred over Missouri on Monday. Photo by Michelle Sproat.

A time lapse showing the change in the amount of sunlight due to the eclipse in Schluersburg Missouri. Video by Kyle Rainey

Lindenwood was outside of the area that experienced a total eclipse of the sun Monday, but that didn’t stop St. Charles faculty, staff and students from stepping outside to witness the event.

Shortly after 1 p.m., the loud buzz of cicadas echoed across campus, and the parking lot lights turned on as the area was blanketed in partial darkness.

Angie Siebert, the new general manager of Chick-Fil-A’s campus restaurant, and other Pedestal Food employees took a break from their workday to experience the eclipse.

“What a great team building experience for our team at Chick-fil-A,” Siebert said.

Kira Rice, a Chick-fil-A employee, said: “It was amazing seeing something historical like this.”

Kat Owens, design chief for The Legacy student magazine, observed the eclipse from her aunt and uncle’s back deck in Ballwin, where the eclipse was total.

“It was an amazingly beautiful experience,” she said. “It looked like it was late evening with the varying shades of orange, a sight almost out of this world, as if being transported to an alien planet. Definitely a sight of a life time!”

“I watched it from when it first started around 11 until 2, which was awesome because I was really able to experience the full progression of the eclipse,” she said. “For how much it was hyped up I wish the totality lasted longer, but it was beautiful, and I feel really lucky to have been able to experience it basically in my own back yard.”

Missourians last saw a full solar eclipse on Aug. 7, 1869.The next solar eclipse will be seen in the United States on April 8, 2024. The southeast corner of Missouri will be in the line of totality for the 2024 eclipse.