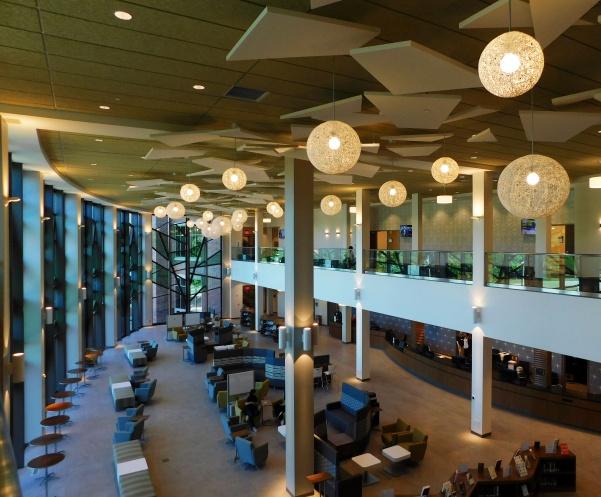 The newest building on Lindenwood University’s campus is now open.

The Library and Academic Resources Center officially opened on Thursday, Aug. 24, following the Book Brigade, an event where volunteers passed the last 50 books to the LARC from Butler Library. The Starbucks in the building had a soft opening on Monday, Aug. 14.

Lindenwood President Michael Shonrock said that the LARC is the “new standard for Lindenwood University.”

“As we renovate and build in the future, this is the standard,” Shonrock said. “We want to give students opportunities to study in the way they do best.”

Administrators from the university broke ground to begin construction on May 21, 2015. The cost of the 100,000-square-foot building was approximately $24.5 million, Shonrock said.

“I’ve been in this business for a long time, and the project was on time and within budget, which was music to my ears,” he said.

It took teams of designers, architects, engineers and school administrators to help achieve the final image.

“The goal [was] to have a modern look that will last,” the president said.

Shonrock emphasized the importance of collaborative learning while showing off the high-tech group study rooms on the second floor of the LARC. Students will also have access to individual study rooms and open spaces to work.

Solene Girard, a graduate assistant who works in the LARC, said the new building has many advantages that Butler Library did not have.

“The other [library] was really cool. I mean it was an old building, but here you get a lot of new stuff,” she said, mentioning the media rooms, theater, shelving units and study areas that are state of the art.

After explaining all of his favorite elements of the LARC, Shonrock added, “And yes, I have plans for another building.”